In this guide, we'll provide a complete walkthrough for all the utilities that Rollbot holders enjoy!

Our NFT presale saw 2,000 Rollbots get snapped up in less than 25 seconds! If you're reading this, you're likely one of our first VIP members and want to know how to benefit from the utility features of our Rollbit-branded NFTs.

This article will explain the privileges you enjoy from the very beginning and touch on some upcoming utility features that you can look forward to!

Rollbots can be viewed from the My NFTs page, as shown below.

Click on a Rollbot to see the traits and utility benefits (Rollback, Rollbox Revenue Share, Market Stakes, Lottery Stakes & Lottery Multiplier). The rarity of each trait outlined in the Rollbot NFT whitepaper and on Rarity Sniper.

If you do not own any Rollbots yet, you can buy some on the secondary market via our own gas-less NFT marketplace or via OpenSea.

Each Rollbot comes with a certain percentage Rollback (ranging from 2.5% to 10%), which is an additional rakeback applied to your Rollbit casino & trading account on top of the standard rakeback.

The body of your Rollbot determines how much Rollback you get, with rarer body types such as Solid Gold, Blue Gold and Persian Gold providing higher levels of additional rakeback.

For those that do not have a Rollbot linked to their profile, they'd get the standard rakeback and receive a smaller amount for the same wager and house edge as the previous example.

To activate Rollback, you must link your Rollbot with your profile. Go to your NFT portfolio, click on the three dots on the top right-hand side of the Rollbot, then go to 'Link with profile'.

You can also link a Rollbot with your profile by going to the Rewards page and click on 'Link a Rollbot'.

Once you've linked a Rollbot from your profile, you'll see a notification on the bottom left-hand side of the page, this Rollbot will be removed from your NFT portfolio and Rollback will be activated. Once you utilise a Rollbot for Rollback, it cannot be used for any other purpose.

The standard rakeback and Rollback (which both depend on the house edge of the games you play) can be claimed separately from the Rewards page after you've wagered some bets in the casino or made some cryptocurrency trades.

Unlinking a Rollbot from your Profile

If you want to unlink your Rollbot, go to the Rewards page and click on 'Unlink from profile'. A notification will appear on the bottom left-hand side and the Rollbot will become available again in your NFT portfolio.

Remember, only one Rollbot can be used for Rollback, so pick the one that has the rarest body.

Rollboxes can only be created by Rollbot holders and offer the chance to become the house in your very own casino game.

To create a Rollbox, you must associate a Rollbot with it (which cannot be lost and is simply used to ensure that only people with Rollbots can create them). Go to 'My Rollboxes', then click on the 'Create Rollbox' button.

You'll then be prompted to associate a Rollbot. Once confirmed, this Rollbot cannot be used for any other purpose. However, you can use other Rollbots to create more than one Rollbox.

After associating a Rollbot, you can then add prizes to your Rollbox. Click on the 'Add Item' button to add prizes, which can be NFTs that you own, cash prizes that are fronted by Rollbit or a combination of both. We'll soon add a feature to let you also use bonus buys and cryptocurrencies as prizes too.

When adding cash, specify the amount in USD and the win probability percentage. A price will then be automatically calculated to open the Rollbox based on the odds and value of items added. As soon as you add an item, the Rollbox will be created and the opening price will be shown.

You can edit or remove prizes at anytime. Deleting the last item in your Rollbox will close it and remove it from the marketplace.

If a NFT is won from your Rollbox, we will automatically replace it with a cash prize of the same value.

For a NFT-only Rollbox with just 1 item, assuming the price is calculated as $100, the Rollbox creator would be paid anything between $0.125 to $0.75 (depending on their Rollbot's revenue share percentage) every time it is opened. The creator will always get paid whenever a player lands on the NFT or on a skull. If the NFT is won, then the creator will get the full price of the NFT.

It's the opposite case with cash-only Rollboxes. The creator will never get paid with a single cash item when the player lands on cash or skulls, but the revenue is shared with the creator.

With a cash-only Rollbox and the same price of $100 to open it with 1 cash prize provided by Rollbit, the creator would only receive the revenue share and not the expected value of the Rollbox. So Rollbot holders would earn anywhere between $0.125 and $0.75 on each opening. The creator never gets paid the full bet when a player lands on cash prize.

For example, if you add a NFT worth $1,000 along with a $1,000 cash prize and both have a win probability of 10%, then the creator of the box will get paid approximately half of the time the skulls are hit. However, if the probability of winning the NFT is very low (say 0.10%) and the cash prize is still 10%, then the payouts from a player hitting a skull will be ten times less frequent for the creator.

Rollbox creators can earn more from each skull hit by increasing the proportion and probability of the NFT prize. For example, with a NFT worth $3,000 and a cash prize of $1,000, the creator will get paid when there's a skull as the outcome approximately 75% of the time.

To increase earnings even further when the skull it hit, you can increase the value of the NFT put in the Rollbox and/or increase the win probability. Earnings can be claimed from the My Rollboxes section.

To withdraw your Rollbot to MetaMask, you'll need to add the RLB token as a custom token to appear in your wallet. The video below shows you how to do that using the Rollbot NFT contract address from EtherScan.

Once you've added the token, you'll then be able to view the number of Rollbots held in MetaMask. By withdrawing to MetaMask, you can then list your Rollbot on OpenSea.

If you want to deposit a Rollbot you've bought off OpenSea to Rollbit to take advantage of the utility benefits, please only use the NFT deposit address from Rollbit and ensure you have enough ETH in your wallet to cover the network fee.

Rollbit's NFT marketplace was launched on October 27th, allowing Rollbots holders to stake their NFTs and earn a percentage of the marketplace fees. Half of the marketplace's profits will be distributed to staked Rollbots after each lottery round (15-20 hours), with the rarity of the hat trait determining your share (i.e., market stakes).

Learn how to stake your Rollbot and claim your earnings here.

The Rollbot lottery launched on November 26th, with each Rollbot that was staked during December receiving lottery tickets in the form of RLB that gives them a chance of winning huge prizes regularly. A staking fee of 0.20% applies to each lottery entry, where half of this is burned and the other half redistributed to staked Rollbots.

The majority of the supply for the RLB token was airdropped to Rollbot holders based on the rarity of the eye trait. This utility is known as lottery stakes, which determines your share of the RLB that is redistributed to staked Rollbots from the lottery's staking fees. 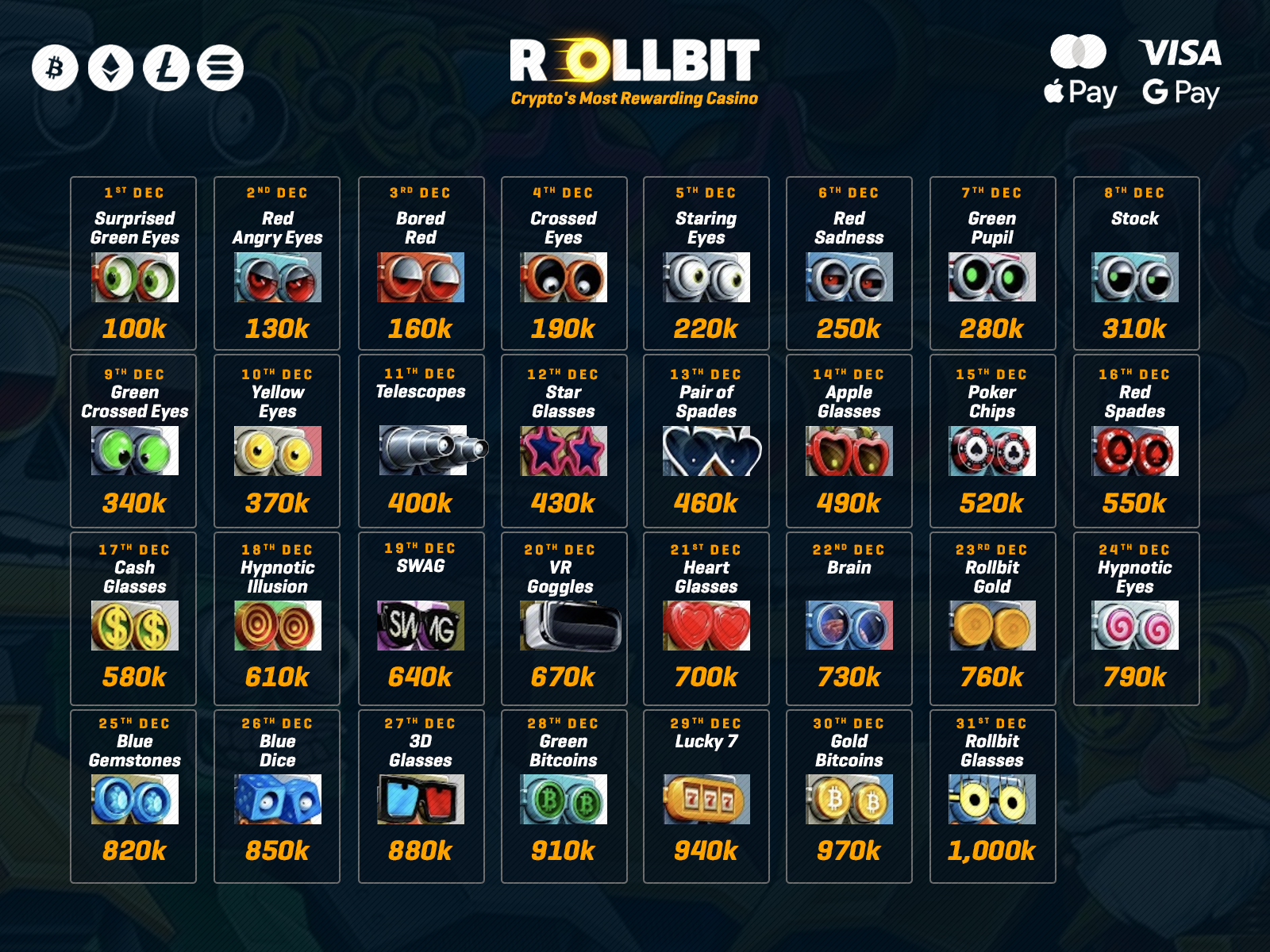 Similar to market stakes, lottery stakes also stack for each staked Rollbot. That means you can earn more RLB from each round by staking multiple Rollbots.

Another Rollbot utility relates to our lottery.

The lottery multiplier is based on the rarity of the ear trait, where Rollbots with rarer ears can unlock a higher multiplier when staking RLB to enter our lottery. The more RLB you stake, the greater your chance of winning (but the more RLB is burned with each entry).

To unlock the lottery multiplier utility, it's similar to the Rollback utility as you have to link a Rollbot to your profile.

If you have 1,000,000 RLB and your Rollbot has the rarest ear trait (Gold Wing), by activating the lottery multiplier you can increase your entry to 5,200,000 RLB. This will give you a greater chance of winning (but will also burn more RLB compared to the case where no multipliers are used). But the Rollbot will remain locked until the lottery round is over, and during this time, you will not be able to stake it to earn marketplace profits or RLB.

To maximise your chances of winning a prize in the lottery, link the Rollbot with the rarest ear trait to your profile to achieve the largest lottery multiplier possible!