In this article, we’ll break down the basics of price charts so you can analyse them to trade cryptocurrencies on Rollbit.

The line chart is the simplest type of chart. These basic charts show how the price of an asset (like bitcoin or ethereum) has moved over time and where it is currently at:

While it’s simple, it’s not that useful as a lot of information about the past behaviour of the price is missing from these charts. Technical analysis is the study of past price behaviour to find high probability trading setups, including where to enter and where to exit.

Most traders start with candlestick charts as an introduction to technical analysis. Candlestick charts go back hundreds of years and originated in Japan amongst rice traders. These charts convey more information than a simple line chart, improving your ability to recognise profitable opportunities in the market.

Let’s take a closer look at candlestick charts to discover the advantages over other types of charts.

What are Candlestick Charts?

As mentioned already, the major advantage of a candlestick chart over a simple line chart is that more information about the price of an asset is displayed. The more information we have, the more we can understand the seemingly random market movements.

Because we can quickly assess the information from a candlestick chart, investors and traders worldwide use them to decide when to buy or sell a wide range of assets, including commodities, cryptocurrencies and stocks.

The default timeframe for charts on Rollbit is the ‘tick’ level (showing each market movement). To switch to a candlestick chart view, click on the button that says ‘Tick’ on the top right-hand side. You can then select your desired timeframe (from 5 seconds up to 1 day):

The main feature of candlestick charts are candles, representing the price action during a particular time period. 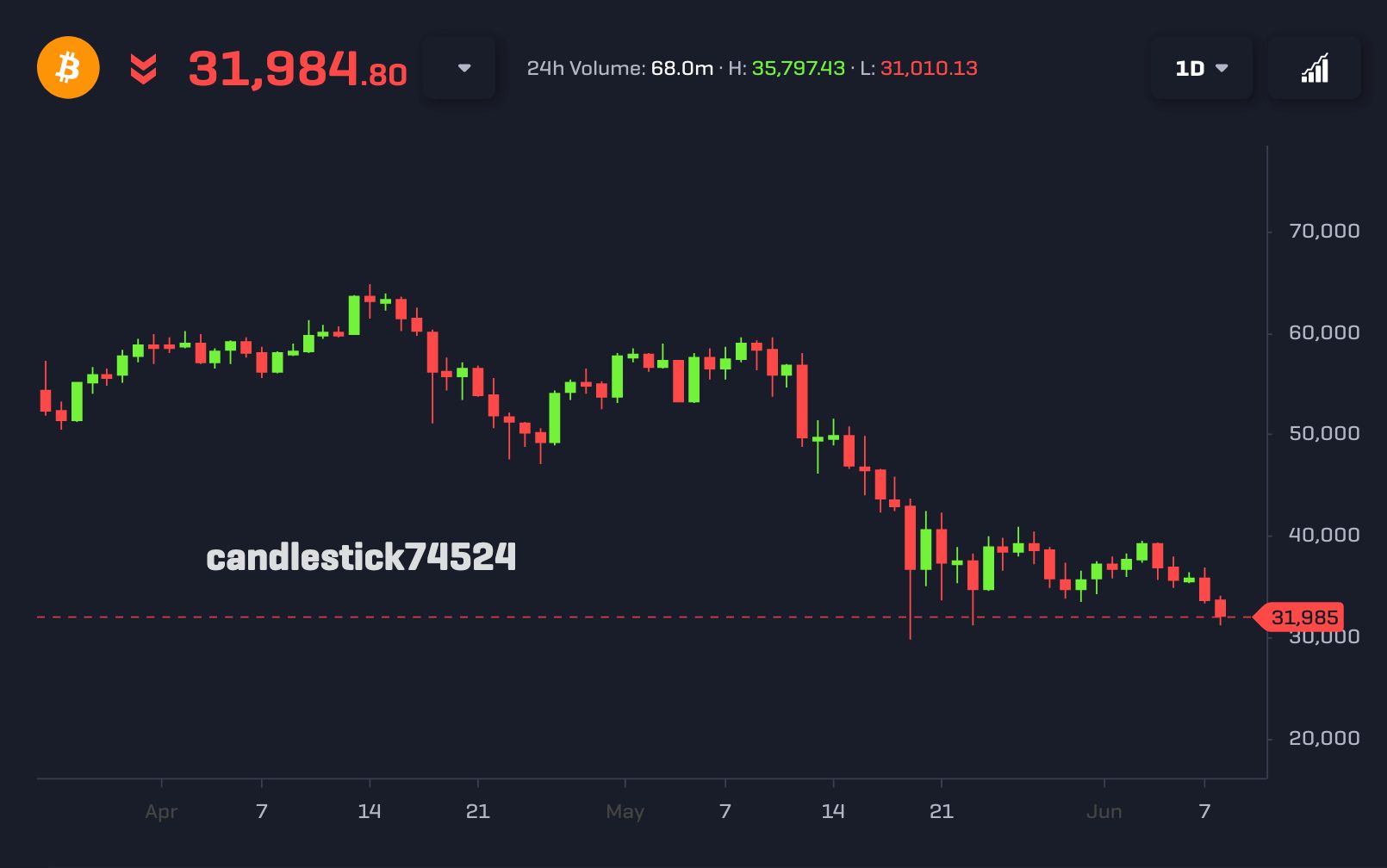 It's also worth mentioning that candles have two components: bodies and wicks.

The thin lines that appear at the top and bottom of some candles are called wicks, where the upper wick shows the highest price for that day and the lower wick displays the lowest price for that day. It's important to pay attention to wicks as they show price zones where buyers or sellers tried to move the market in their favour, but they failed to sustain this movement. As a result, wicks are often viewed as critical areas of support or resistance. 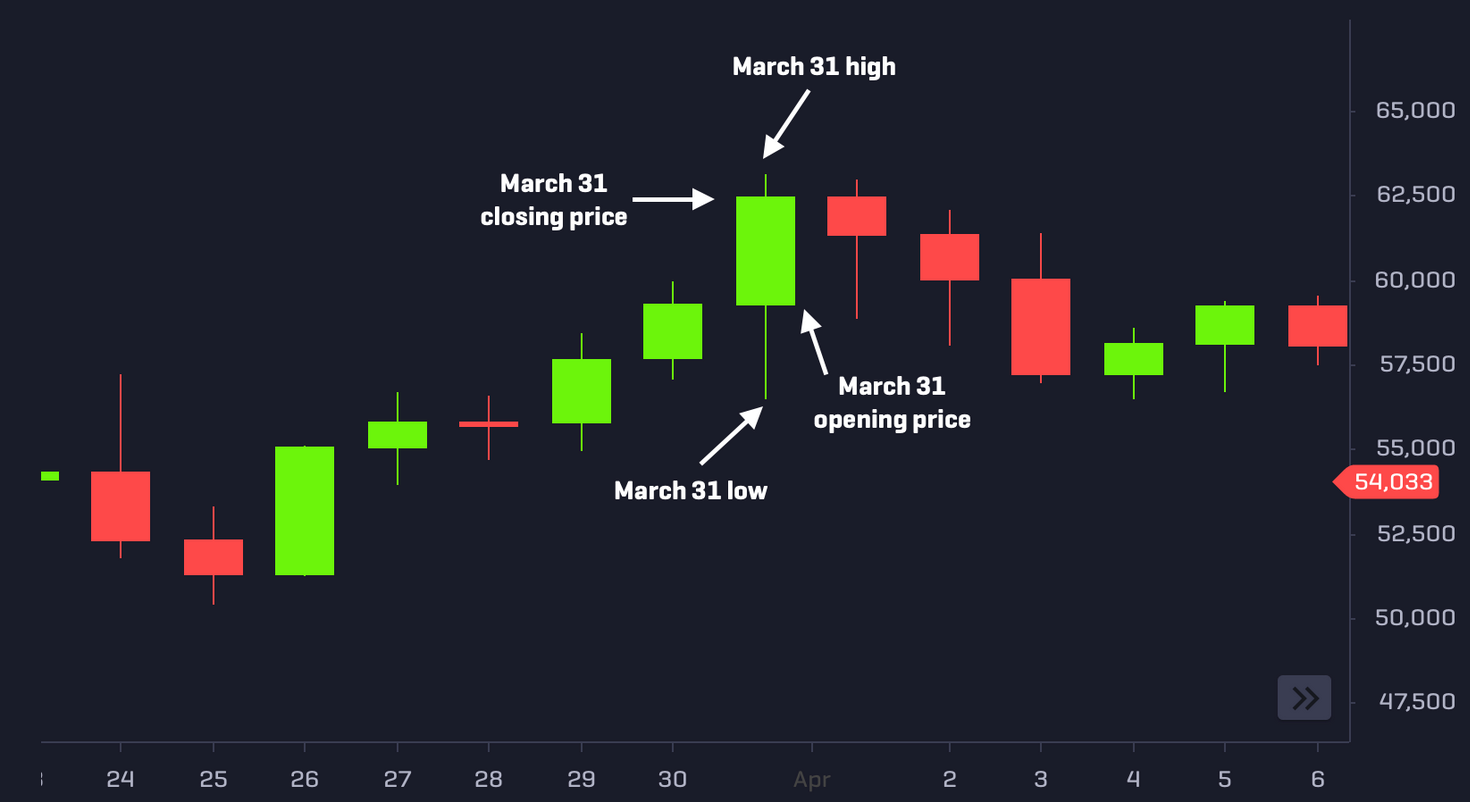 The anatomy of a candlestick using the price action of bitcoin on March 31, 2021.

By examining a candlestick chart, we get an accurate summary of the previous price behaviour. Typically, it's not as risky to go in the same direction of the trend and it's often given as advice to newbie traders that 'the trend is your friend'.

It’s also important to look at the previous candles (the further back you go, the better!) to assess what’s been happening in the market that led up to the present and to help you make a more informed decision of how the price action might develop.

For example, if you look at the past 100 candles and notice that one colour dominates the chart, it signals a trending market. If there are mostly green candles, then it shows buyer strength, and the trend is bullish. Here, we should analyse the chart to look for signs of trend continuation.

If there are mostly red candles, then it shows weakness, and the trend is bearish. Again, you’d want to look at the chart to find setups for a continuation in the downward price action.

In this section, we'll look at three trend continuation patterns: the Marubozu, the Rising Three Method/Falling Three Method and the Bullish/Bearish Mat Hold.

The Marubozu (meaning 'bald head' in Japanese) is a single candlestick pattern that shows a situation where buyers or sellers were in control of the entire trading session, that is, it has a large body with little to no wicks on either side.

A Bullish Marubozu has a large green body, meaning buyers pushed the price higher over the course of the trading session and the price closed near the highest price in that session, while a Bearish Marubozu has a red body, with the price closing at or near the lowest price for that session. Since at the close of a Marubozu candle, either the buyers or sellers are strongly in control of the market at that point, so it is a useful pattern to recognise trend continuation.

The larger the body of a Marubozu candlestick, the more weight we should give it as an entry signal. Remember, it is important to consider the context of the candlestick pattern (rather than in isolation) and the prior candlesticks before that.

Once you've spotted a Marubozu pattern, the opening price and the midpoint of the candle can be used as potential entry points into the underlying trend. The open price and midpoint of a Marubozu frequently offers a support level for Bullish variants (or resistance for Bearish variants).

Let's look at an example below, which shows a Bearish Marubozu on the 1-hour chart for bitcoin: 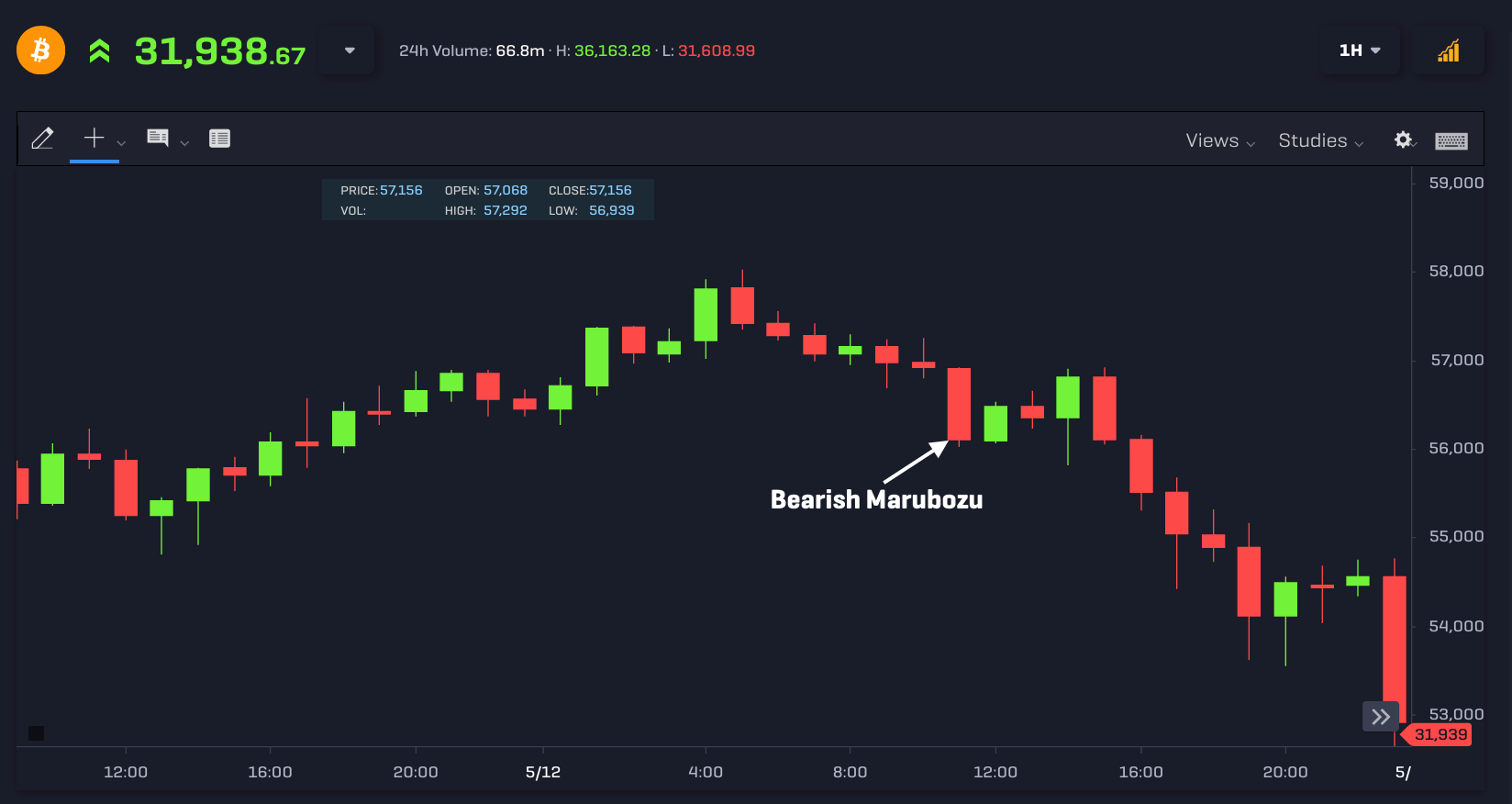 Once the Marubozu has formed, we can get in on the underlying trend by entering near the midpoint of the candle (at $56,498) or near the opening price of the Bearish Marubozu (at $56,906).

We see that after the Marubozu pattern was completed; the market tested both the midpoint of the candle's body (at $56,498) and the open of the Bearish Marubozu (at $56,906), which would've given you an opportunity to sell bitcoin and profit from the downward trend. The market attempted to move back above the high of the Bearish Marubozu but stalled and continued downwards, reaching lows beneath $53,000 around 10 hours later.

A Bullish Marubozu pattern provides an opportunity to buy a cryptocurrency to profit from an upward trend. As shown below, the market tested both the midpoint and the opening price of the Bullish Marubozu candle multiple times, before continuing higher: 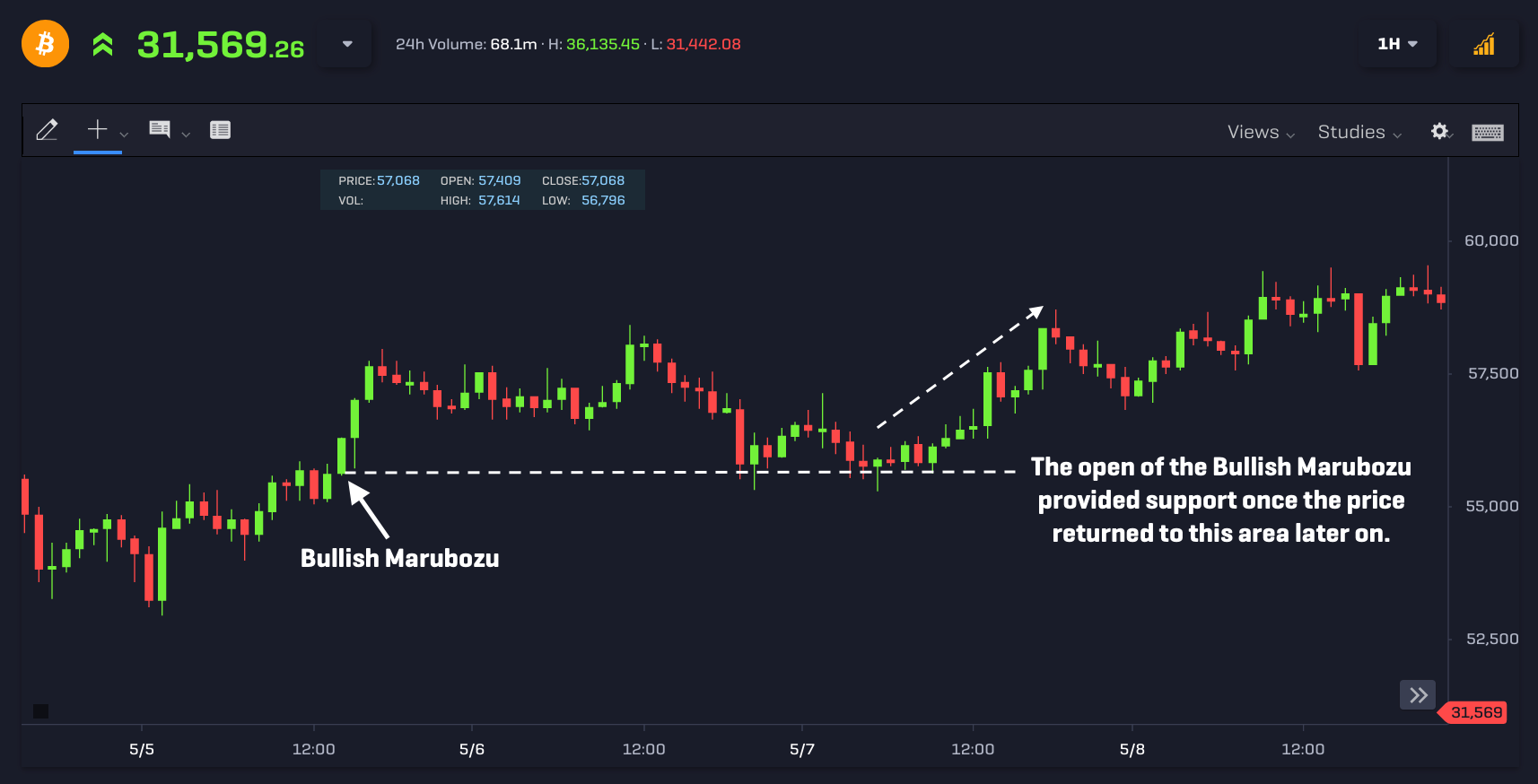 An example of the Rising Three Method pattern is shown below using the 15-minute chart:

Notice that after the Rising Three Method pattern, the price increased from just below $39,000 and continued to climb higher, reaching a peak near $39,250.

An example of the Falling Three Method is shown below using the 1-hour chart for bitcoin: 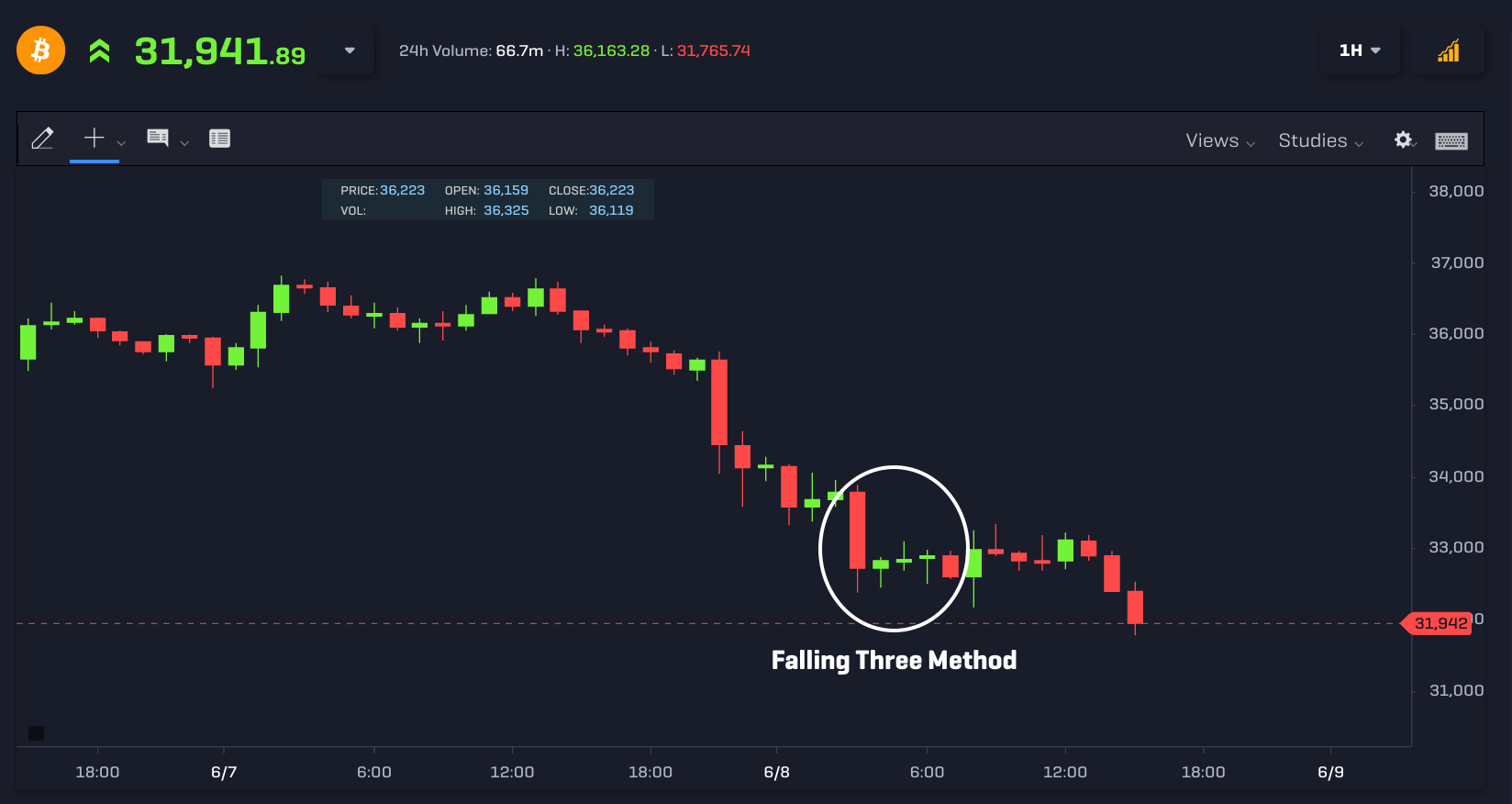 Notice that prior to the Falling Three Method, the price of bitcoin was in a short-term downtrend. Once the pattern was formed with a closing price of $32,597 on the fifth candle, the price eventually continued going lower and reached lows near $31,700. 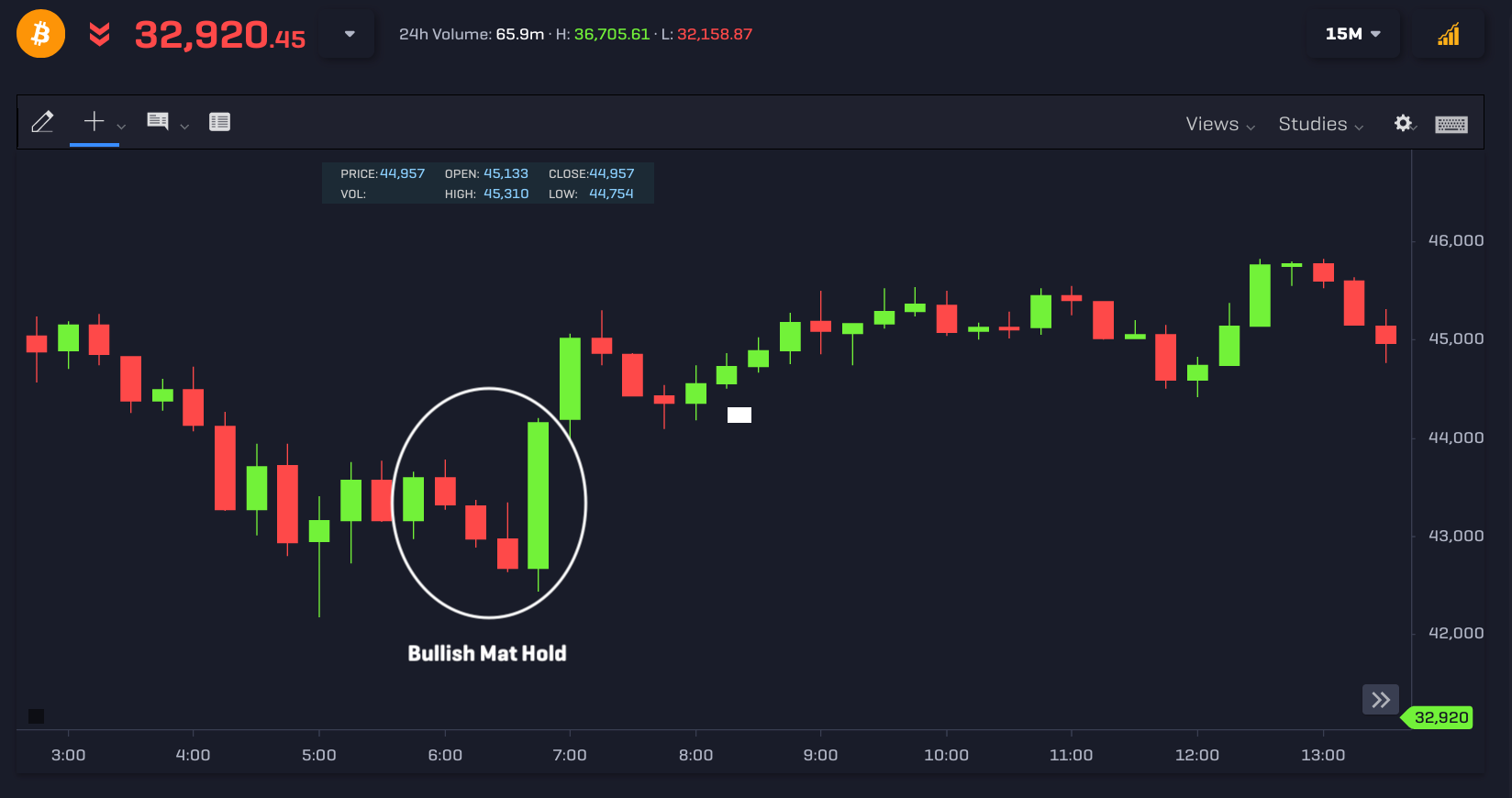 A Bearish Mat Hold is like a Three Falling Method, except that the three bullish candles in the middle go above the high of the first bearish candle.

While going along with the trend is the relatively safer option for traders, there are also trend reversal patterns to look out for. Going against the trend might be more rewarding if you can get in at the right time around the end of an existing trend.

In the next section, we'll look at candlestick patterns that can help you identify trend reversals.

In this section, we'll look at the following trend reversal patterns: the Hammer, the Shooting Star, the Gravestone Doji, and the Engulfing pattern.

The Hammer candlestick is a common pattern found at the end of a downward trend and suggests a change in trend could be underway. This pattern shows sellers tried to push the price lower but this selling pressure was absorbed by buyers, who managed to push the price higher to close above the opening price.

An example of how to trade the Hammer candlestick is shown below by the 5-minute chart:

After a downward move, a textbook Hammer pattern formed on the close of this 5-minute candle, so we'd look to buy BTC near the closing price of $32,600.

In the trading sessions that followed, the price continued higher and reached a peak near $33,250. You could also wait for further confirmation after a Hammer candlestick pattern before you buy (for example, strong buying volume).

The reverse of the Hammer candlestick pattern is known as the Shooting Star pattern.

The Shooting Star candlestick is generally found near the end of an upward trend and signals that a reversal could be underway. This pattern shows buyers tried to push the price higher, but this pressure was absorbed by sellers, who pushed the price to close below the opening price. 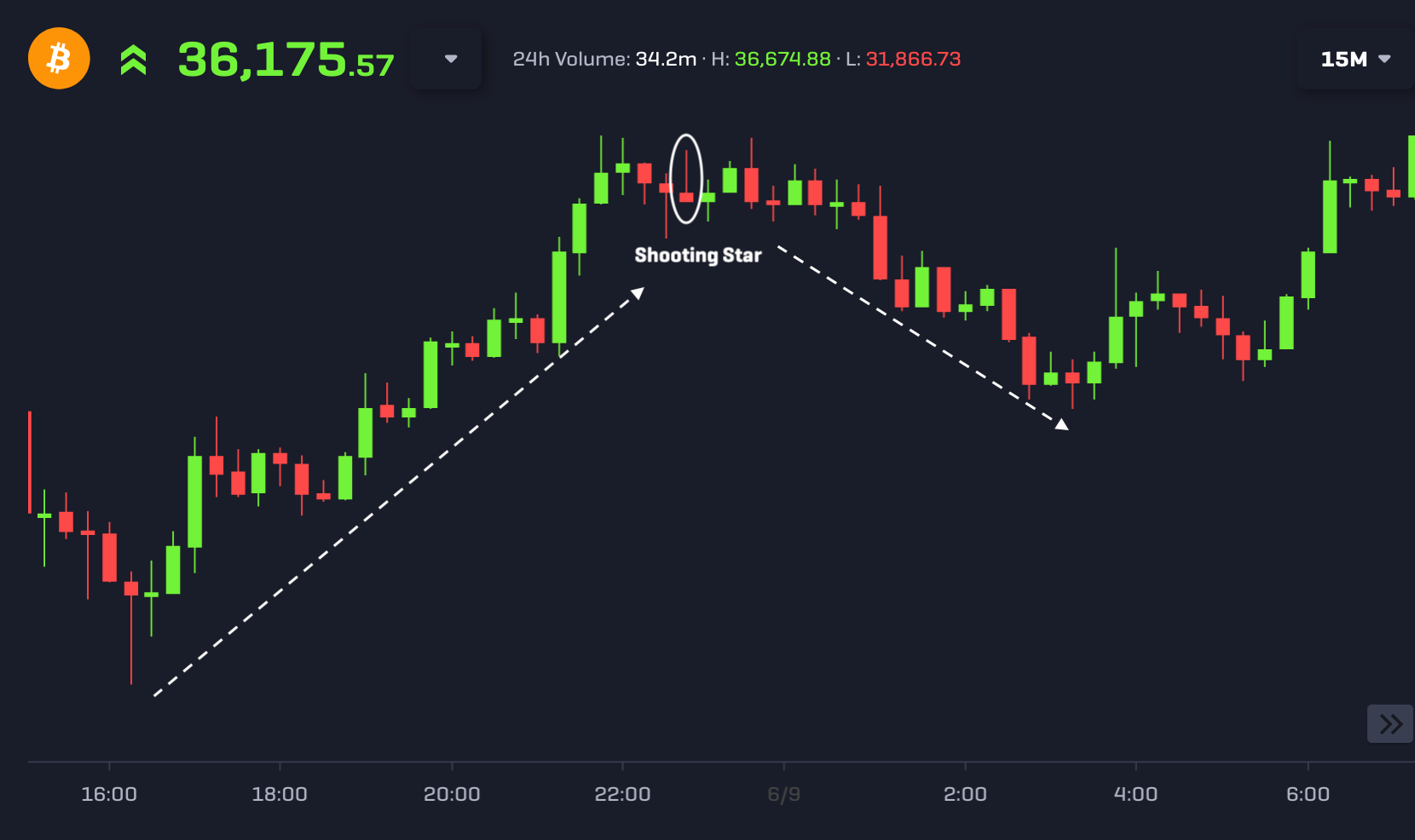 If the Gravestone Doji pattern is found during an uptrend, then it could suggest that a reversal is unfolding, as this formation shows that buyers tried to push the price higher, but failed with the price settling much closer to the trading session's lowest price:

Along with the Gravestone variant, other types of Dojis include: the long-legged Doji (a Doji with a long lower wick which illustrates buyer strength), the Dragonfly Doji (which predicts a price increase if found in a downtrend) and the standard Doji (which is neutral and requires careful analysis of the preceding candles to assess whether it's bullish or bearish).

One of the most frequent candlestick patterns found when looking at bitcoin charts is the Engulfing pattern, and is an important formation since it tells us that sellers have overtaken the buyers (or vice versa).

Both of the Engulfing variants are displayed on the 4-hour chart of bitcoin below: 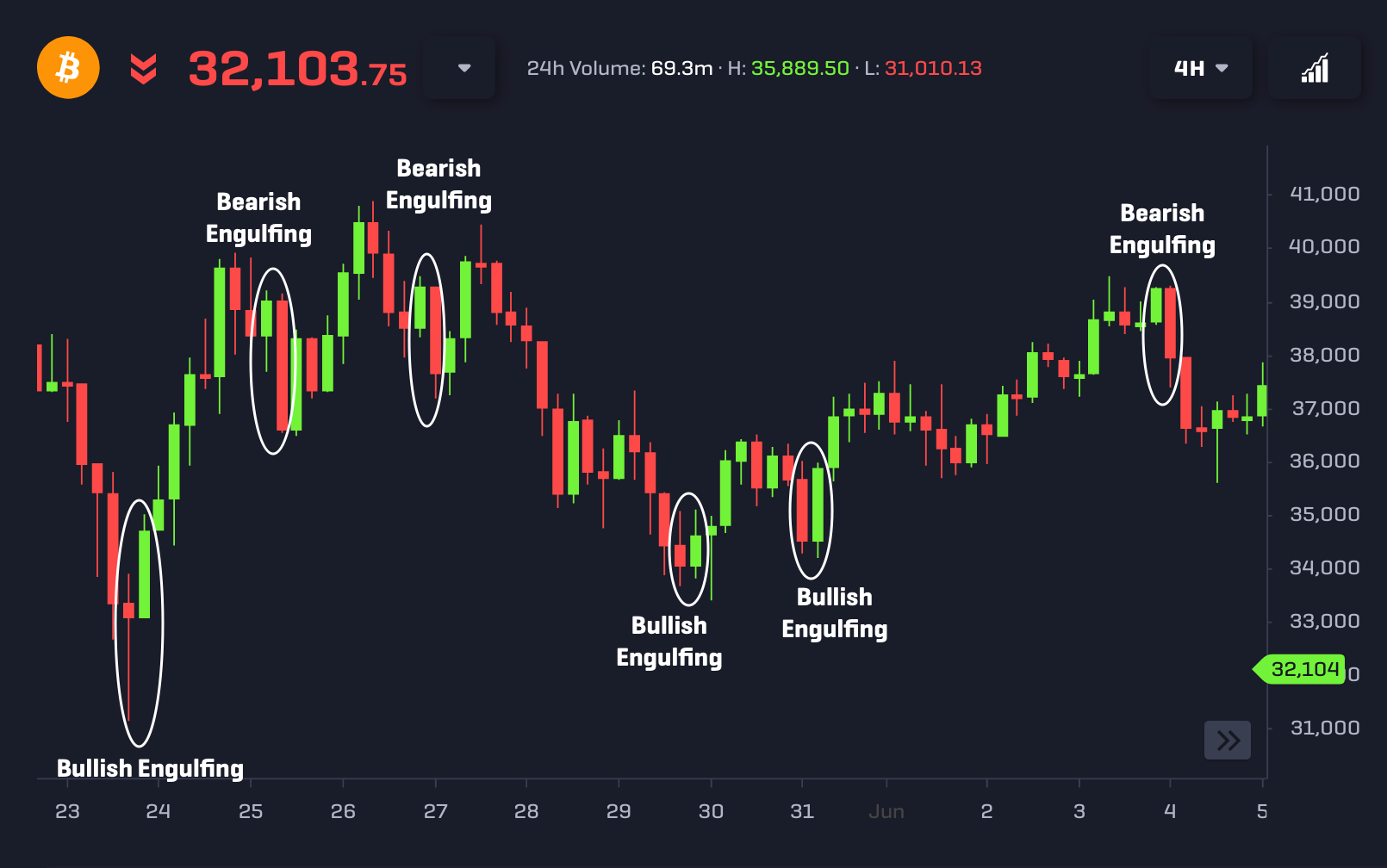 There are many more instances of Engulfing patterns in the chart above (see if you can find them all!) but they're less significant and hold less weight.

The image above only highlighted the more significant patterns that are likely to have a higher probability of success, since they have a much greater engulfing effect (meaning the second candle moves out further above the high or below the low of the first candle). A greater engulfing effect provides a stronger signal since buyers/sellers moved the price further away from the previous high/low. 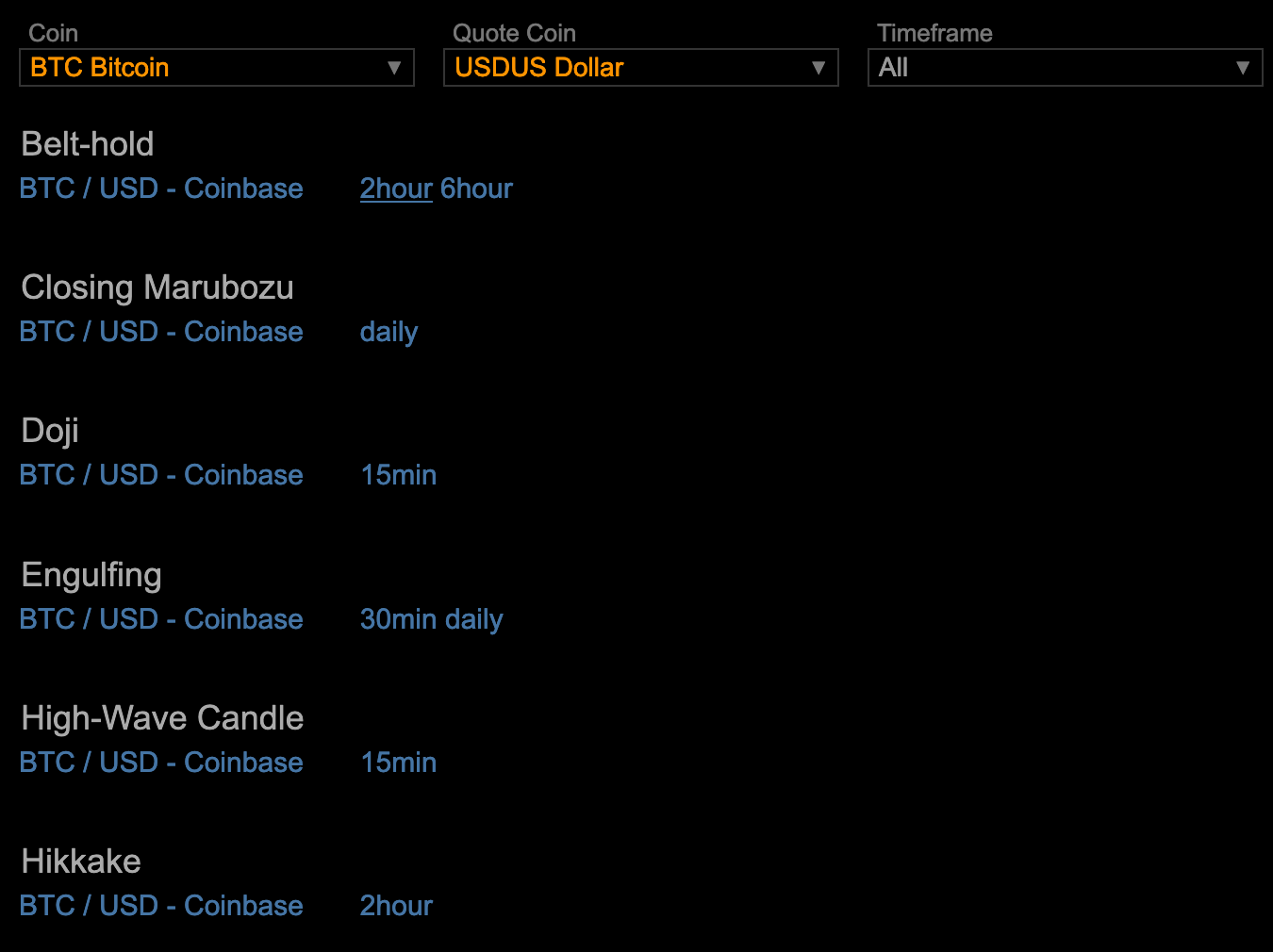 In this article, we've only covered a handful of candlestick formations. You can use our cheat sheet below to identify other patterns: 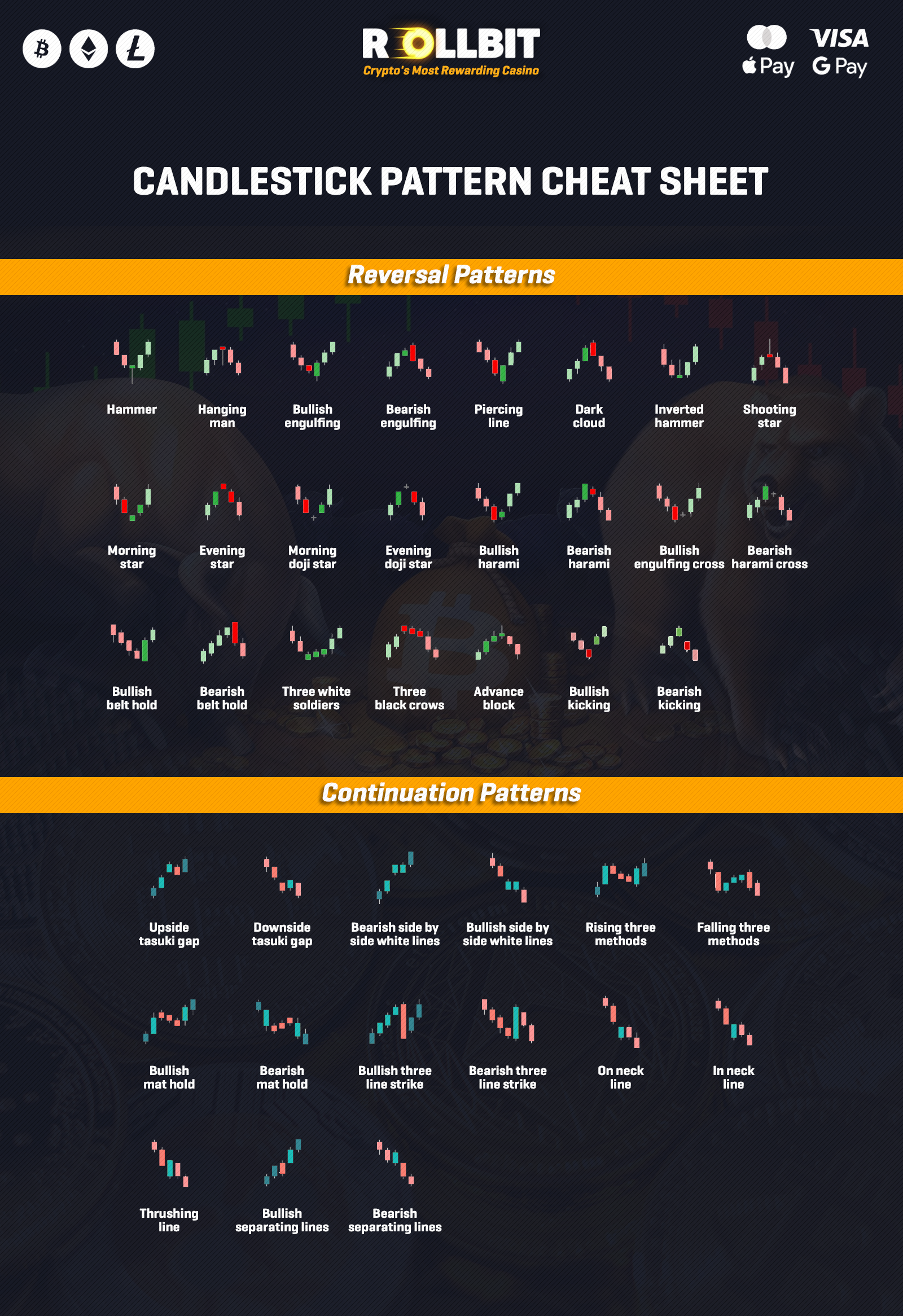 Subscribe to our blog to get updates from the Rollbit team and more content on cryptocurrency trading!If you enjoyed our article or found it useful, please share it with others on social media. If you have any requests on other forms of technical analysis you'd like us to blog about, contact us via Discord or via Twitter!