In this short guide, we'll assess Ethereum's native asset ETH as an investment.

ETH (or ether) is the native token of the Ethereum blockchain, which is often described as a world computer, a distributed network where miners provide computation resources and are rewarded with block rewards as well as transaction fees.

We can think of ETH as a digital commodity which is used to pay the transaction fees for instant and permissionless global transfers. However, unlike Bitcoin there is no fixed limit on the supply of ETH so holders have to bear a small amount of inflation over time. The investment case for Ethereum has mainly revolved around the idea that the demand for ETH from users of decentralised applications (or Dapps) will grow faster than the inflation rate through block rewards.

Therefore, it's useful to think of Ethereum as a digital economy native to the cyberspace where anyone, anywhere, can take part. But Ethereum is more than just a financial network. The network has become the dominant smart contract blockchain platform and transactions can run computer code to power Dapps and complex financial contracts. Anyone can create an application with any rules by defining it as a contract.

To run these smart contracts, ETH is used as the fuel that is used to pay for their execution on the blockchain. While Bitcoin missed out on the opportunity to capture wider use cases for the blockchain outside of money, Ethereum’s approach is to be the blockchain version of a Swiss army knife.

The bull case for ETH is that Ethereum maintains the lead as the go-to smart contract platform and will continue to improve. Even with newer entrants focused on smart contracts, Ethereum has retained the lead in terms of the developer community and the number of users. According to DappRadar, almost 80% of all Dapps are based on Ethereum.

The cryptocurrency has built a strong network effect and now hosts an abundance of economic activity ranging from financial services like stablecoins/lending protocols (e.g., Aave, Compound and DAI), to games/metaverses (Axie Infinity, Decentraland and the Sandbox) and NFTs such as CryptoPunks, the Ethereum Name Service and much more. 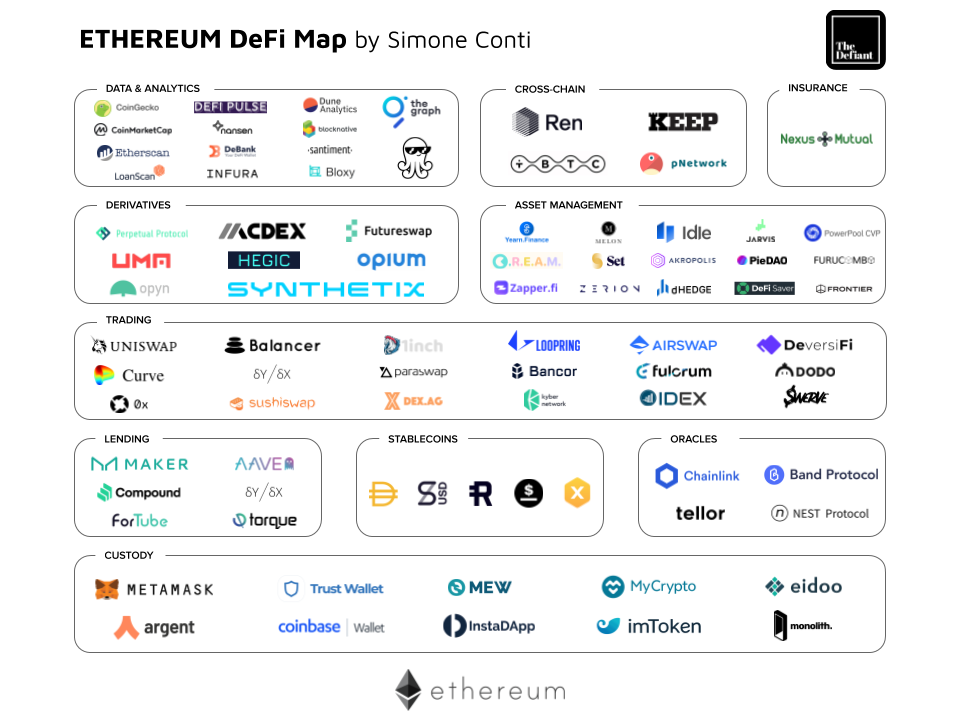 Why Has Ethereum Often Outperformed Bitcoin?

As we've mentioned previously, Ethereum has captured a wide variety of use cases than Bitcoin and other top cryptocurrencies. Because of the broader use cases for Ethereum, the native ETH token tends to outperform Bitcoin (BTC) in bullish market conditions, illustrated by the chart below: 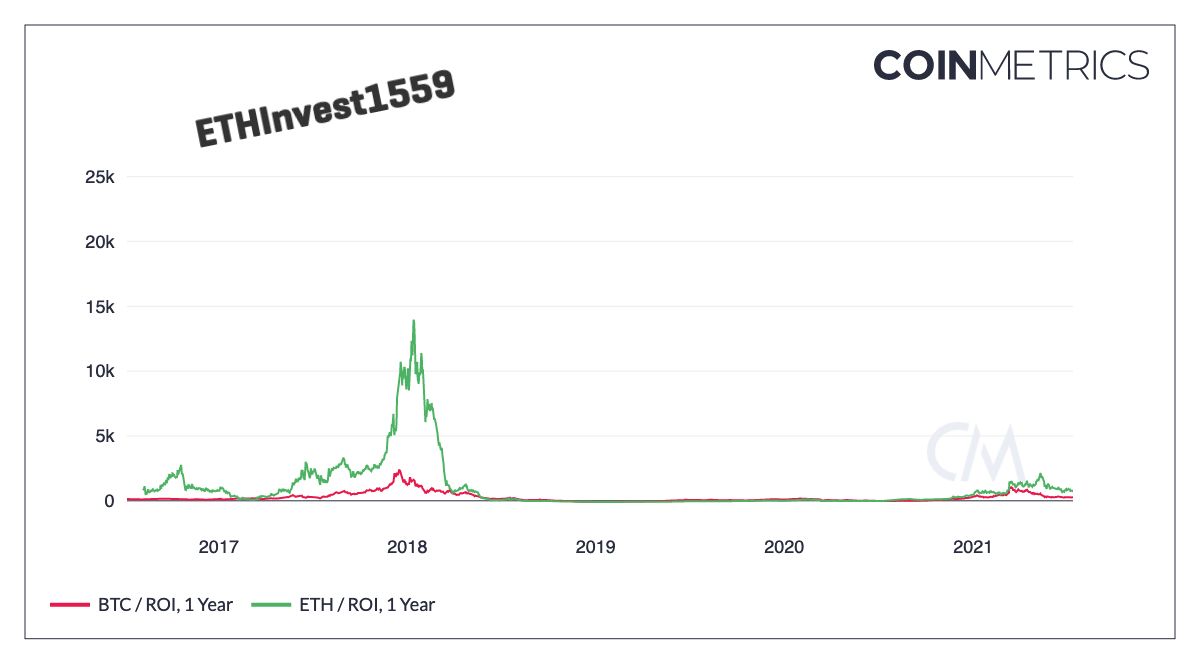 The 1-year return on investment (ROI) for ETH has consistently risen far above that for BTC, although the difference between the two has reduced somewhat since 2016-2018 bull run. However, with greater potential to the upside comes greater risk, with the drawdowns in the 1-year ROI for Ethereum being larger than Bitcoin's.

Two important applications that have emerged in recent years and have played a part in boosting the valuation of the ETH token are Decentralised Finance (DeFi) and Non-Fungible Tokens (NFTs).

The value of Ethereum's ETH token is likely to rise as DeFi disrupts legacy finance and goes head-to-head with Wall Street. Given that DeFi enables permissionless innovation, reduces operating costs of financial services, facilitates faster settlement and the fact it is accessible to anyone with an internet connection, the potential for Ethereum is huge. The whole DeFi ecosystem (and a major share of the NFT sector) is built around ETH as the primary currency, which is used as collateral, making the cryptocurrency not just a digital commodity but also a store of value.

Some analysts certainly think it’s possible that Ethereum flips Bitcoin regarding network valuation soon. This idea has been around for a few years, known as ‘The Flippening‘, although it hasn’t materialised yet. However, Ethereum has already flipped Bitcoin in a few important fundamentals that are proxies for demand such as transaction fee revenue collected by miners and transaction count.

Even Goldman Sachs recently released a report stating that due to an upcoming upgrade, Ethereum could overtake Bitcoin as an investment asset. The upcoming upgrade will radically change Ethereum and is known as Ethereum 2.0, a multi-year transition from Proof-of-Work to Proof-of-Stake that will make ETH an interest-bearing asset (as well as a digital commodity and a store of value).

The demand for ETH will increase once Proof of Staking goes live, since staking ETH will provide investors with cash flows. At the moment, if you stake ETH into the ETH 2.0 contract, you'll earn a yield of around 5-7% per year. The easiest way to stake is to join a pool run by a third party but you'll pay a fee for the convenience. If you're more technical, you can set up your own ETH 2.0 validator to get a higher return from staking.

Investors from the world of traditional finance seek yields whether that be from buying a bond (effectively lending money and getting interest payments) or by buying a company's stock (which can be valued based on the expected future cash flows). Similarly, taking part in Ethereum's consensus will require ETH to be locked up as collateral and in return, you'll receive staking rewards.

The promise of ETH 2.0 is that the blockchain will become much more energy efficient and enable greater scalability, eventually facilitating a greater number of transactions that'll rival established payment networks like Visa and far exceed any other cryptocurrency. With the ability to handle more transactions, that means the Ethereum economy can grow faster, onboard more users, and transfer much more value.

While Ethereum 2.0 will take several years to complete, there are other upgrades that are due soon that may also strengthen the investment case for Ethereum: EIP-1559 and Rollups.

EIP-1559 (or Ethereum Improvement Proposal 1559) will be activated in August 2021 to make gas fees more predictable, improve the user experience and transaction fees will be burned instead of going to miners.

The update will also go some way towards addressing an important criticism of Ethereum: it has no programmatic monetary policy or fixed supply limit like Bitcoin. Currently, the total issuance is not hard coded into the protocol and has hampered ETH's claim as a store of value. Instead, the issuance of new ETH until now has been actively managed by the Core development team.

But as a result of EIP-1559, ETH's rate of inflation will decrease and is estimated to be cut in half from 4% to 2% after EIP-1559. Along with more ETH being burned and benefitting holders, the shift to Ethereum 2.0 will also reduce the rate of issuance as Proof-of-Work mining is phased out.

While the total supply will not be limited like Bitcoin's, a lower rate of inflation would make ETH more scarce and improve the store of value argument.

Rollups are a scaling solution for Ethereum until the transition to Ethereum 2.0 is fully completed. There are two types of Rollups: Optimistic Rollups and zk-Rollups.

With greater scalability, more activity can be hosted on the Ethereum blockchain, which increases demand for the native asset ETH. As developers (of which there are thousands) build more applications on top of Ethereum and they experience greater growth in the number of users, the price of the ETH token will capture the value of this activity.

What are the Risks Involved with Investing in Ethereum?

Despite being at the forefront of innovation in the cryptocurrency scene, you should be aware of the risks involved in investing in Ethereum.

First, there's competition from other blockchain platforms. Already we've witnessed massive growth in the number of users and the total value locked in blockchains such as Binance Smart Chain, Polygon and Solana recently as users have shifted to these ledgers to take advantage of cheaper and faster transactions. There's also stiff competition from smart contract platforms such as Avalanche, Cardano (led by Ethereum co-founder Charles Hoskinson) and Polkadot (also created by a co-founder of Ethereum, Gavin Wood). There's a slim chance that one of these platforms could take the crown as the top smart contract platform.

Second, there are technical risks involved in investing in Ethereum. For example, the transition to Ethereum 2.0 is an ambitious undertaking and will take several years to complete. Since Proof-of-Stake is not as proven as Proof-of-Work and is more experimental, there's a small possibility that a catastrophic bug (such as TheDAO hack back in 2016) could put a dent in confidence, delay the transition, while also giving a window of opportunity for another smart contract platform to take the lead.

Finally, there are regulatory risks. While Bitcoin and Ethereum are likely to survive any tough regulations, if enacted they could depress the value of these networks. The regulatory situation is very fluid and constantly changing, so it's worth keeping in mind and assessing the probabilities of a crackdown on cryptocurrencies by governments when investing in ETH.

In conclusion, given that Ethereum is the dominant smart contract platform and has an ambitious roadmap ahead of it, ETH is certainly one of the safest bets when it comes to investing in the cryptocurrency market. However, it's also important to be aware of the risks too and you can hedge accordingly by investing smaller amounts in Ethereum's competitors.

What do you think about Ethereum? Do you think it's still a good investment? Can another smart contract platform take the top spot? Let us know on Discord or via Twitter!