Polygon's native token (MATIC) has experienced a lot of social buzz recently and provides potential solutions to Ethereum’s congestion problem. The native token MATIC is up over 4000% from the start of 2021. What’s behind this spectacular rally?

Since the start of the year, Ethereum's transaction fees have increased as demand for block space has exploded because of DeFi (Decentralized Finance) and NFTs (Non-Fungible Tokens) garnering mainstream interest. 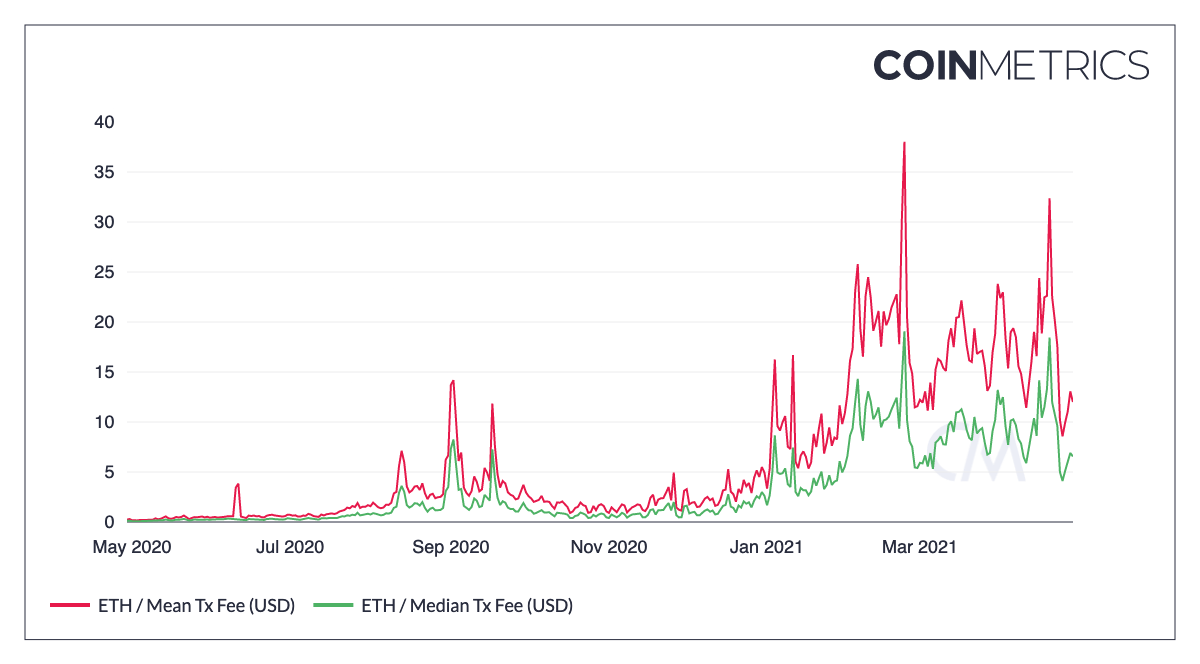 Because Ethereum transactions are bundled into blocks that are produced and ordered sequentially, users are required to bid a high enough gas price to get their transaction into the next block and to get fast confirmation it has to be settled.

When network usage is high, Ethereum users experience long wait times and transactions fees become more expensive. Individuals with a big stack of ETH are less sensitive to transaction fees, or certain users may be prepared to pay for an urgent transaction that will confirm quickly.

In both cases, these users might outbid you and offer a higher fee to get their transactions confirmed quickly, paying more to get them into the next available block. Since there is limited block space, the Ethereum network has only ever been able to handle a maximum of 15-20 transactions per second throughout its entire history.

TxStreet.com is a useful visual aid to understand the Ethereum blockchain. Each bus represents an Ethereum block (with the block number displayed on the bus). The gas price required to get into a particular block in terms of Gwei is also shown. Each person represents a transaction and the houses are the most popular applications on Ethereum, such as Maker and Tether USD.

While there's been a decline in the fees since the end of February, they remain sufficiently high on Ethereum to prohibit the 'man in the street' from participating in some DeFi applications. Rather than making open finance accessible to people that would benefit from it the most, it has so far mostly been the cohort of cryptocurrency whales with deep pockets.

The long-term solution to the scaling problem is Ethereum 2.0 (also known as ETH 2.0 or Serenity), an ambitious, multi-year transition and re-architecting of the Ethereum blockchain, shifting from Proof-of-Work to Proof-of-Stake.

Since Ethereum 2.0 is a direct improvement to the base layer, i.e., the main Ethereum blockchain, it is categorised as a Layer 1 scaling effort. But in the meantime, the Ethereum network will heavily rely on Layer 2 protocols to scale to thousands of transactions per second.

What is Layer 2 Scaling?

Layer 2 scaling is a term used to describe a scaling mechanism that is not programmed directly into the Ethereum protocol which helps to scale applications by handling transactions off the main chain (layer 1).

Ethereum transactions are submitted to these layer 2 nodes instead of being submitted directly to layer 1; the layer 2 instance then batches them into groups before anchoring them to layer 1, securing these transfers and making sure cannot be altered. The specifics of different layer 2 technologies and implementations can vary significantly.

Layer 2 protocols have enjoyed increasing popularity in recent times as the Ethereum blockchain becomes congested. Polygon is one such example, utilising two flavours of Layer 2 scaling: Plasma and sidechains.

A plasma chain is a separate blockchain that is anchored to the main Ethereum chain and uses fraud proofs to arbitrate disputes. Transactions are bundled together off-chain, if someone tries to cheat Plasma, anyone with the data can verify that the transaction isn't genuine and submit a challenge to prevent it from being included and submitted to the main chain.

The benefits of scaling with Plasma include higher throughput and lower transaction costs. However, this approach does not support smart contracts, only basic transactions. There can also be a degraded user experience, as withdrawals can be delayed because of the use of fraud proofs.

What is a Sidechain?

A 'sidechain' on Ethereum refers to any mechanism that allows tokens from the layer 1 main chain to be securely used within a completely separate blockchain but still moved back to the original chain if necessary.

The benefits include support for general computation and smart contracts, meaning it can potentially migrate a larger proportion of the activity on Ethereum, as well as being an established technology. However, the downsides of this approach is that it is less decentralized.

How Does Polygon Work?

Polygon, originally launched as the MATIC network in 2017, was co-founded by Jaynti Kanani, Sandeep Nailwal, Anurag Arjun and Mihailo Bjelic. The MATIC network initially focused on the Plasma scaling solution, which was developed by Ethereum co-founder Vitalik Buterin and Lightning Labs co-founder Joseph Poon. At that time, Plasma was presented as a promising option to scale Ethereum and increase the capacity of the network.

Several avenues of further research were pursued for Plasma, one of them being More Viable Plasma, co-architectured by none other than MATIC co-founder Jaynti Kanani. More Viable Plasma (MVP) works by creating copies of the Ethereum blockchain called ‘child chains’ and submitting snapshots to the parent chain (e.g., Ethereum).

But because of the unanticipated difficulties with scaling based on Plasma, Ethereum scaling research focused on other areas. Along with a Plasma-based solution, Polygon offers a sidechain scaling solution, known as the MATIC Proof-of-Stake chain. The MATIC PoS chain is compatible with the Ethereum Virtual Machine, enabling projects to effortlessly migrate their Ethereum smart contracts.

After the practical difficulties encountered working with hundreds of different projects, the MATIC network decided to expand into a Layer 2 aggregator, focusing on different flavours of Layer 2 scaling, instead of going all in on a particular scaling solution. As part of this expansion, the MATIC network also rebranded to Polygon. 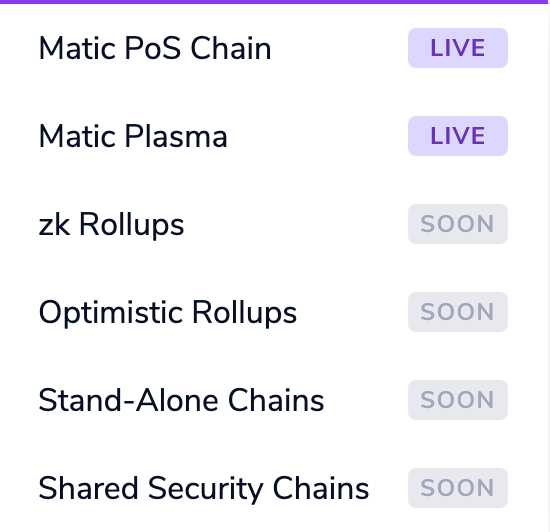 Polygon is working to enable support for two major types of Ethereum-compatible blockchain networks (as well as Optimistic and ZK-Rollups):

Unlike other blockchains focused on interoperability (such as Avalanche, Cosmos and Polkadot), Ethereum is the primary hub of activity for Polygon and is creating an ecosystem to connect multiple scaling solutions together. Projects can even build their own customisable scaling solutions to suit their specific needs.

Some of the DeFi and NFT projects currently utilising Polygon include:

A full list of projects using Polygon can be found here.

As part of its expansion, Polygon is working to accommodate all scaling solutions, including Optimistic Rollups, ZK-Rollups, and standalone sidechains. These techniques (in one way or another) take transactions off the Ethereum chain, free up block space, reduce congestion and as a result ease fee pressure.

Here's a useful link if you want to read about the different Layer 2 scaling solutions in depth.

What is the MATIC Token?

The MATIC token, which was launched on May 19, 2020, is the native token of Polygon and has a fixed supply cap of 10 billion tokens. The token was first distributed in a private sale (3.8% of total supply) and then an Initial Exchange Offering during April 2019 (19% of total supply), raising $5.6 million.

The two major use cases for MATIC are:

MATIC outperformed most of the top altcoins since the start of the year, rising from around $0.0175 to a high near $0.9500 as of April 30th. The token’s price rose steadily during the first quarter. As Ethereum scaling issues came to the forefront over March/April 2021 and the social buzz surrounding the MATIC token snowballed, the cryptocurrency’s price rise intensified over the first half of April 2021: 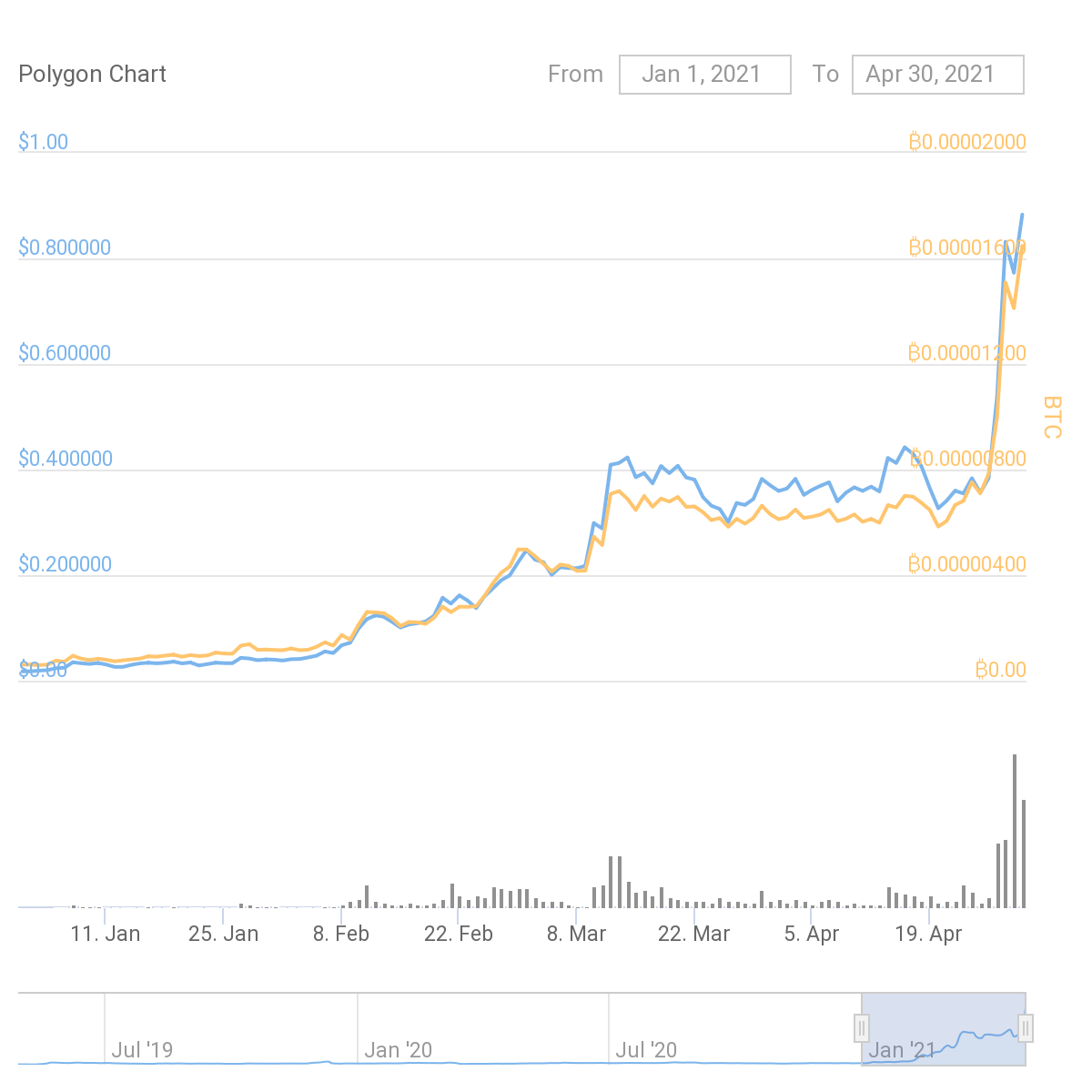 What does the Future Hold for Polygon and the MATIC Token?

If the Polygon network realizes the aim of offering an all-in-one scaling solution for Ethereum until the transition to Proof-of-Stake is complete and captures most of the activity of Decentralized Applications (Dapps), MATIC may enjoy more gains in the long-term.

However, the bull case for MATIC depends on the Polygon network easing most of the congestion on Ethereum and hosting a large proportion of Dapps. Much of the recent appreciation in MATIC could be attributed to the growth of the ecosystem over the past few months.

The risk for the MATIC token here is that the most popular Ethereum applications may adopt a scaling approach other than Polygon's. For instance, one scaling approach that has not launched yet but is gaining a lot of momentum is Optimism - based on Optimistic Rollups - a layer 2 scaling approach that's yet to be offered by Polygon. Another risk is that Ethereum's layer 1 scaling plan progresses faster than expected.

What do you think about the MATIC token? Tweet us or leave a comment in our Discord!

If you have any other comments or feedback about our blog, let us know!