Germany gave the green light for 4,000 investment funds that manage a total $1.8 trillion to invest up to 20% of their portfolio in Bitcoin, effective from July 1.

The SEC has yet to approve a Bitcoin ETF, with many applications being rejected or delayed since the Winklevoss twins' COIN ETF application in early 2017. The approval of a Bitcoin ETF would open up the leading cryptocurrency to a wider audience of investors as well as simplify the process of gaining exposure to the leading cryptocurrency, without traditional investors having to worry about issues like custody.

JPMorgan Report: Yields from ETH 2.0 Staking is "Incentive to Invest" in Cryptocurrency

Two senior analysts from JPMorgan released a report this week stating that staking in Proof-of-Stake protocols like Ethereum 2.0, will gain traction as a source of revenue for investors. Ethereum's shift from Proof-of-Work to Proof-of-Stake is already underway and is expected to be fully completed by 2022.

The report stated, “Not only does staking lower the opportunity cost of holding cryptocurrencies versus other asset classes, but in many cases cryptocurrencies pay a significant nominal and real yield.”

The analysts forecast that staking yields could rise to $40 billion by 2025 after the Ethereum's transition from a Proof-of-Work system to full Proof-of-Stake with Ethereum 2.0.

The regulated stablecoin USD Coin (USDC), which initially launched on Ethereum in 2018, will expand to more blockchains.

The stablecoin, which is pegged 1:1 with the US Dollar, is currently supported by four blockchain networks (Algorand, Ethereum, Stellar and Solana). According to recent reports, USDC will soon become available on other blockchain networks including: Avalanche, Celo, Flow, Hedera, Kava, Nervos, Polkadot, Stacks, Tezos, and Tron.

The USDC stablecoin has experienced rapid growth in 2021 because of rising popularity of Decentralised Finance, outpacing other stablecoins such as Tether (USDT). Data from Dune Analytics shows USDC accounted for 35.8% of all transfer volume by stablecoins over the past 30 days, closing in on Tether's share of 38.6%. 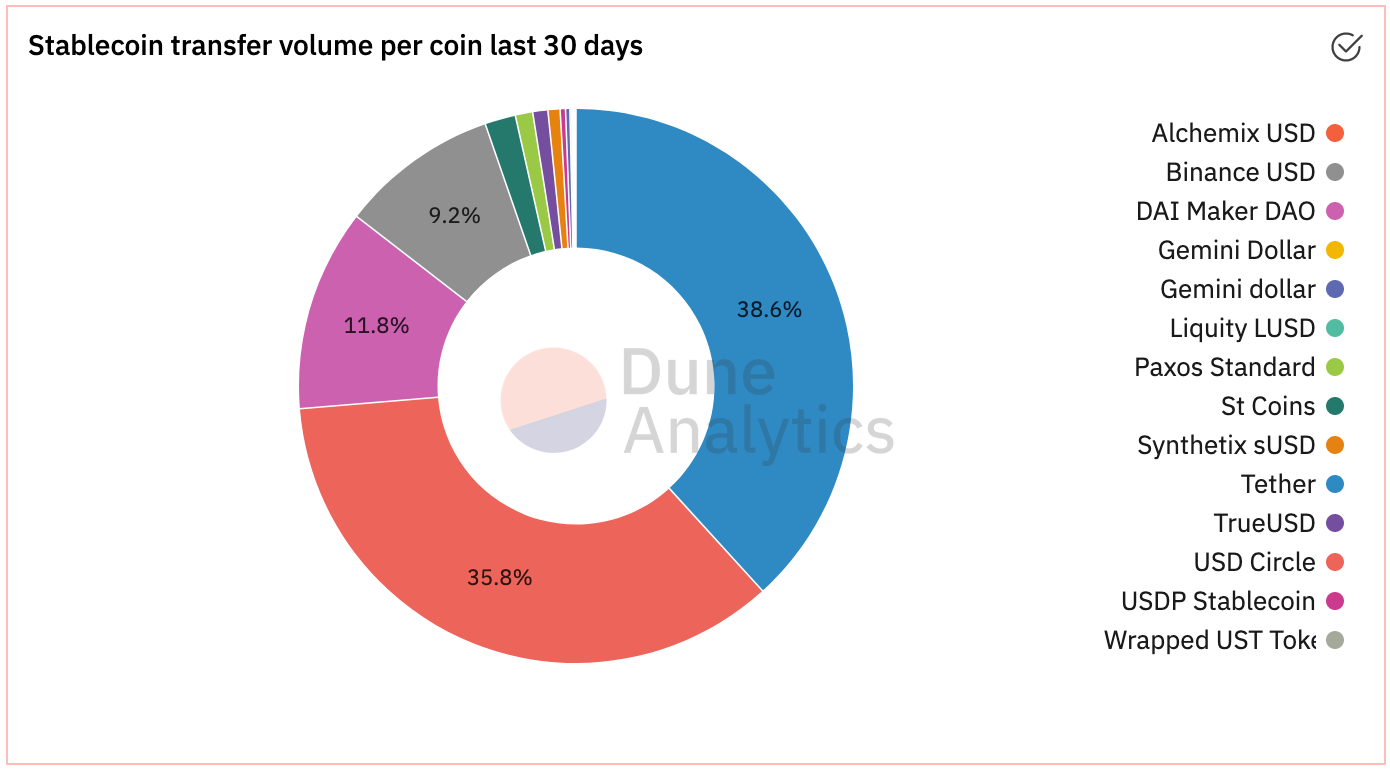 June was a record month for the Non-Fungible Token (NFT) marketplace OpenSea, which saw $149.75 million in sales. The data indicates the NFT trend is still going strong, with OpenSea's NFT sales during June 2021 surpassing the previous high seen in March 2021. 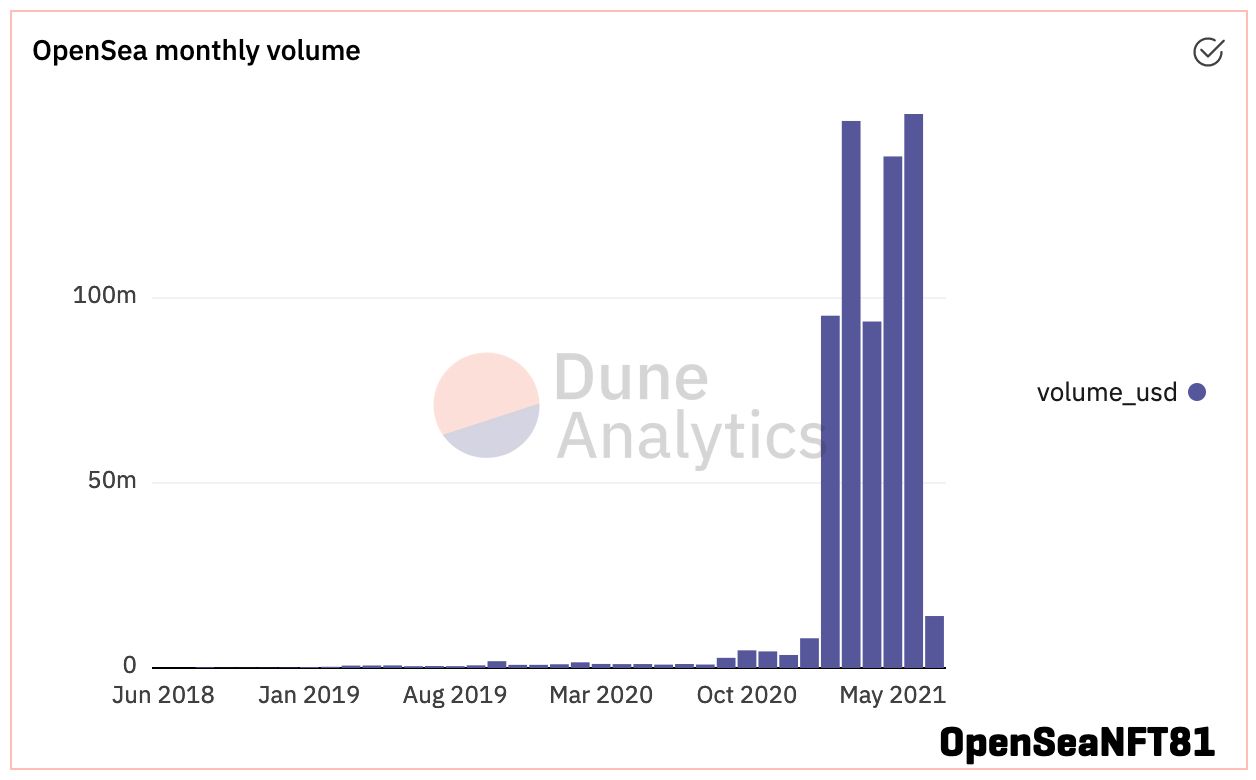 Sotheby's Auctions NFT of the Source Code for the Web for $5.4 Million

An NFT of the source code for the world wide web was auctioned by Sotheby’s for $5.4 million.

Sir Tim Berners-Lee, credited with the invention of the web, created the NFT which includes a time-stamped, signed archive, along with 10,000 lines of the source code that initially made it possible to display an HTML document.

Speaking on the NFT sale, Sir Tim Berners-Lee said, "I’m selling a picture that I made, with a Python programme that I wrote myself, of what the source code would look like if it was stuck on the wall and signed by me."

Check out the NFT below: 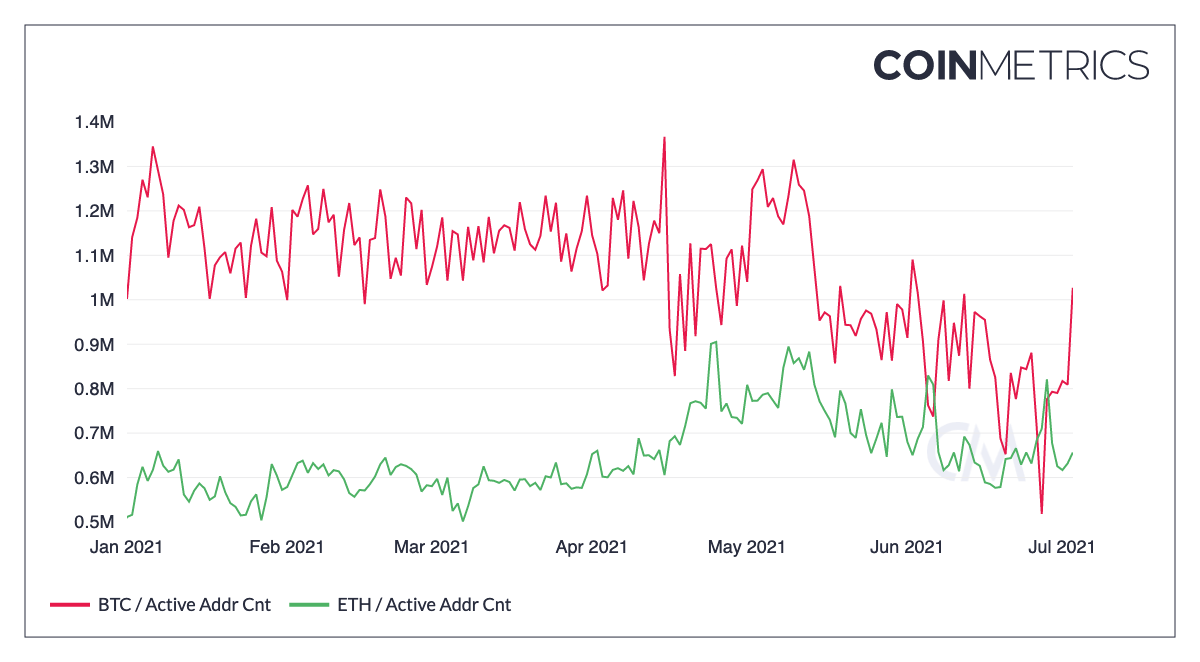 Bitcoin is approaching the high from June 21st ($35,763) and if the market can sustain above this level, the outlook is bullish. Going forward, this level remains key for bulls to retake control. 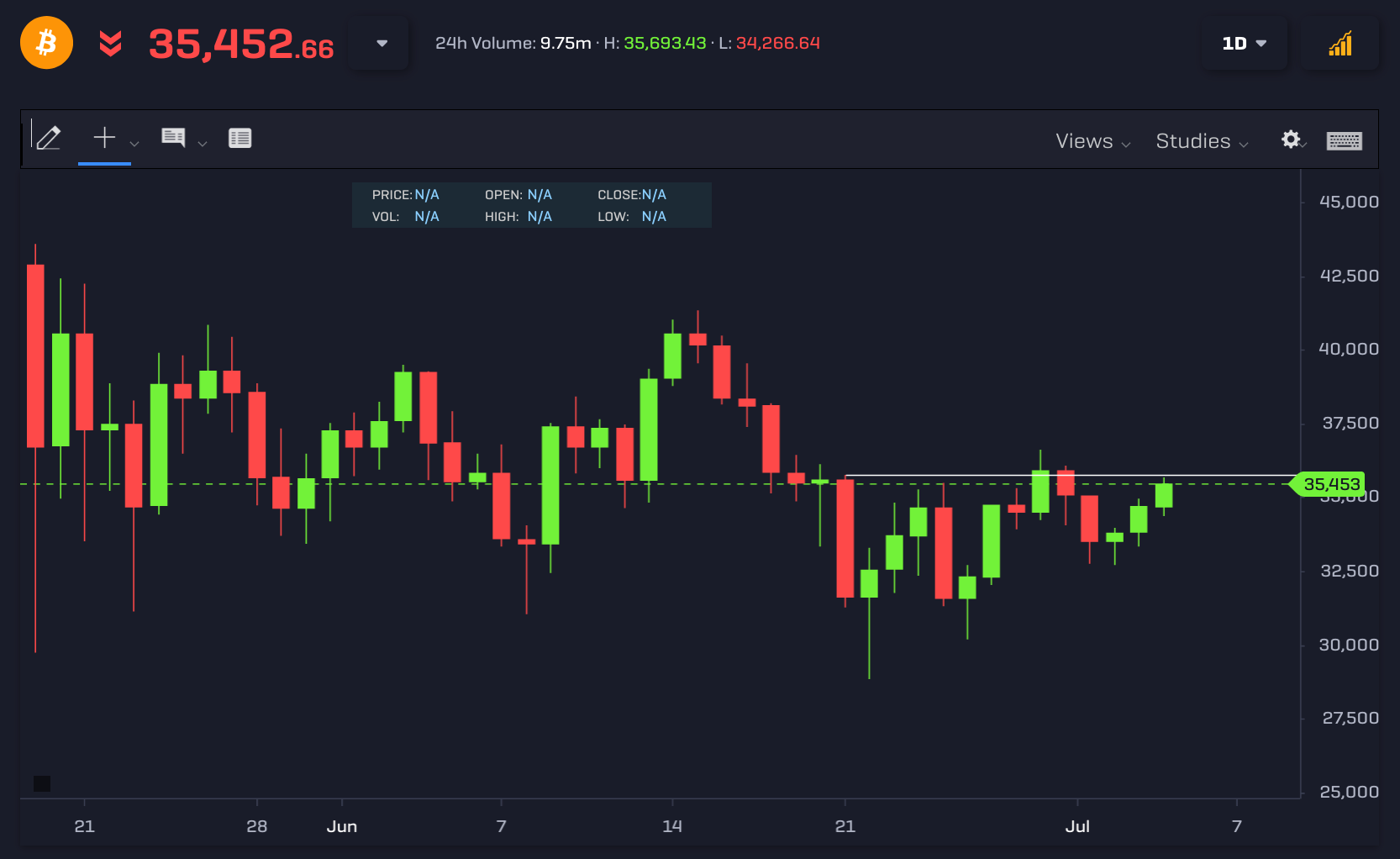 Bitcoin has been trading within a rectangle pattern for the past 6 weeks between ~$40,700 and ~$31,700, as illustrated below. The price of Bitcoin could breakout in either direction. The height of the rectangle (~$9,000) usually gives a good estimation of how far a breakout may go.

If a breakout to the downside materialises, the market could go as low as $22,700, whereas Bitcoin could target $50,000 in the event of a breakout to the upside. Of course, the trading range may remain intact in the short/medium-term, with $30,000 holding as firm support multiple times so far in 2021. 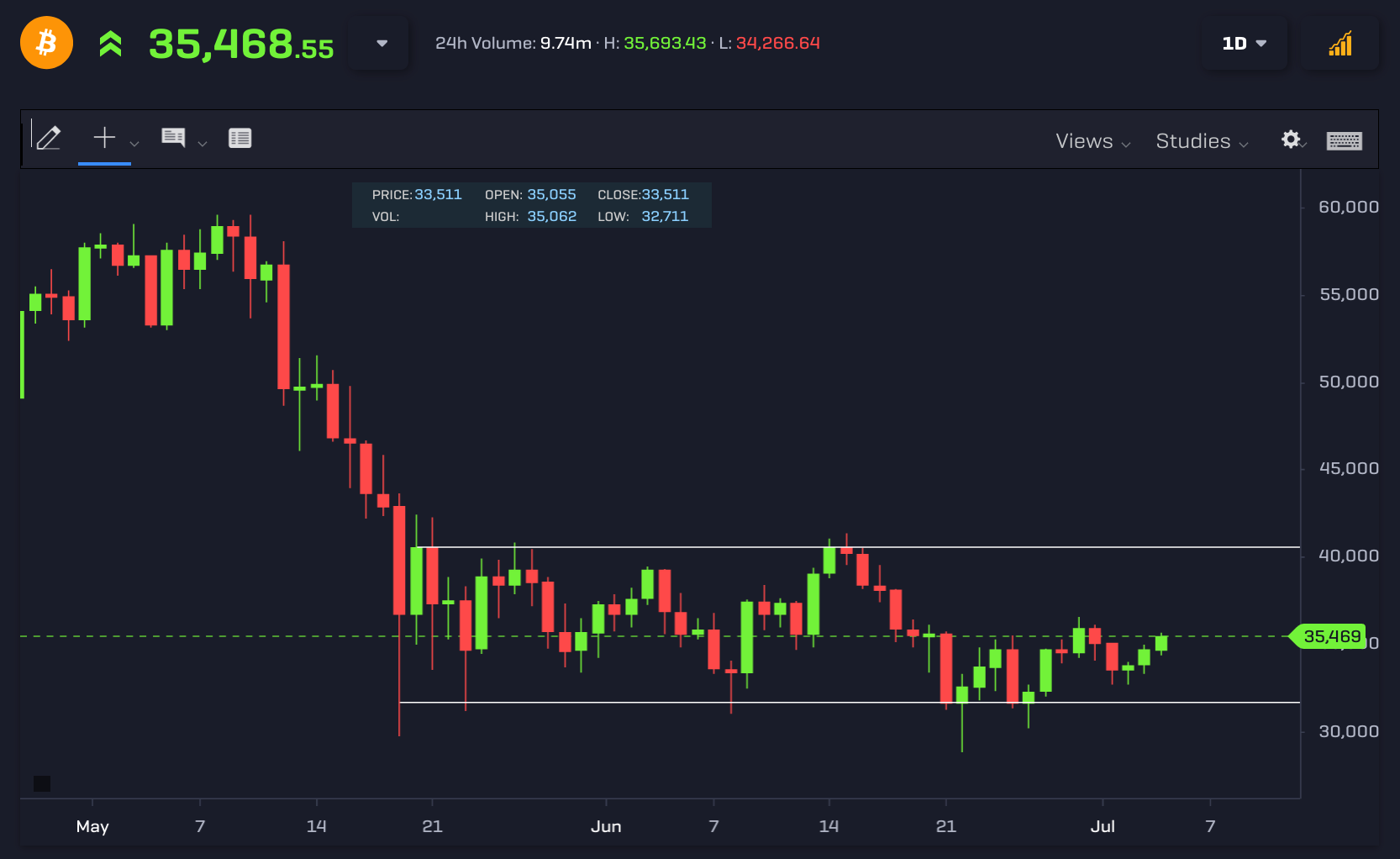 As shown on the 1-hour chart below, the price of Bitcoin bottomed on July 2nd around $32,867, which corresponds with the opening price of a Bullish Marubozu from June 27th. If the price heads south towards $32,867, then we should see increased buying interest.

The 1-hour chart also shows that Bitcoin is in a short-term uptrend. As long as the price action respects the channel drawn on the chart, Bitcoin seems to be ready to revisit the $38,870 level (the opening price of February 8th's candle, which saw the largest daily gain in 2021 so far). 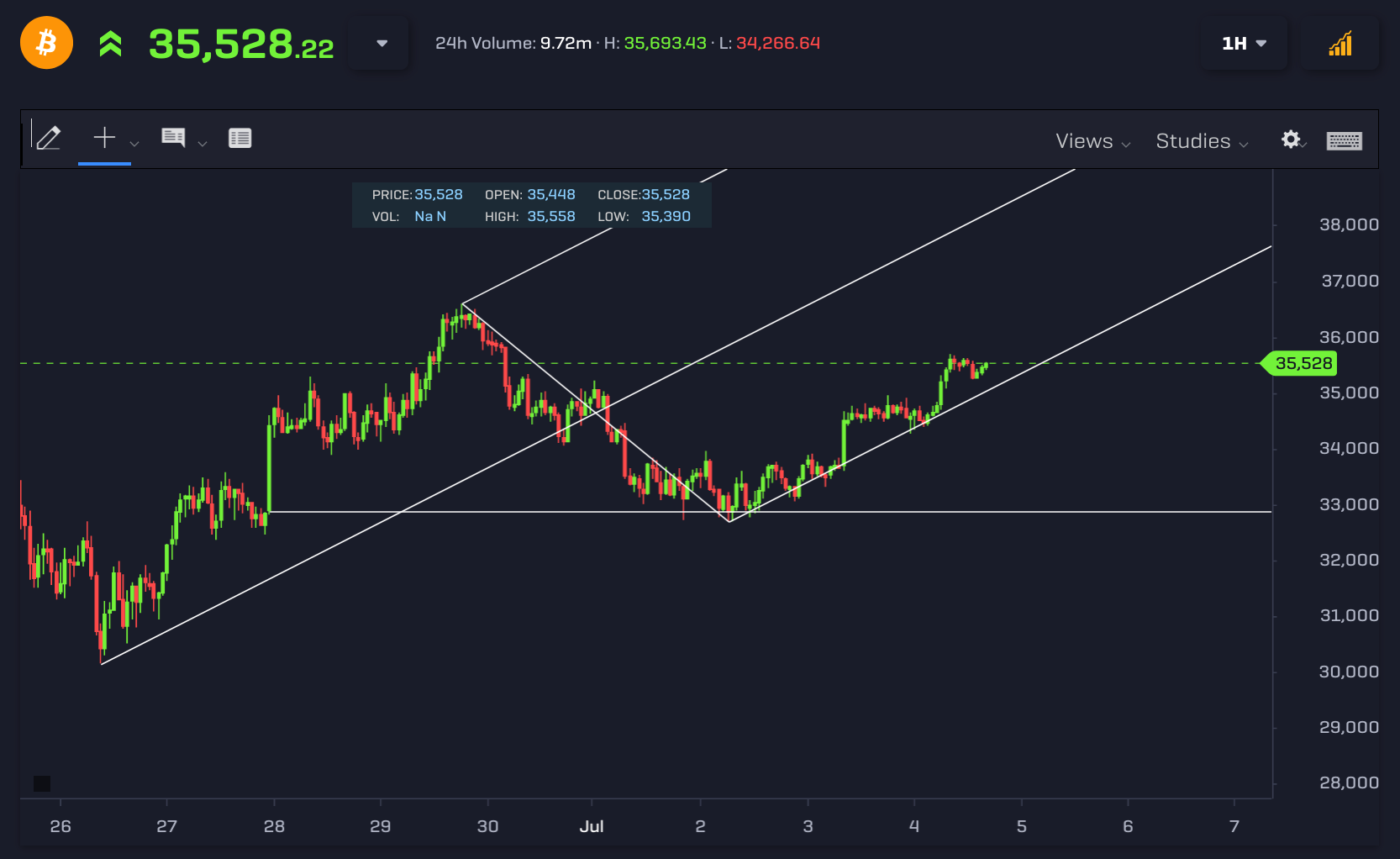 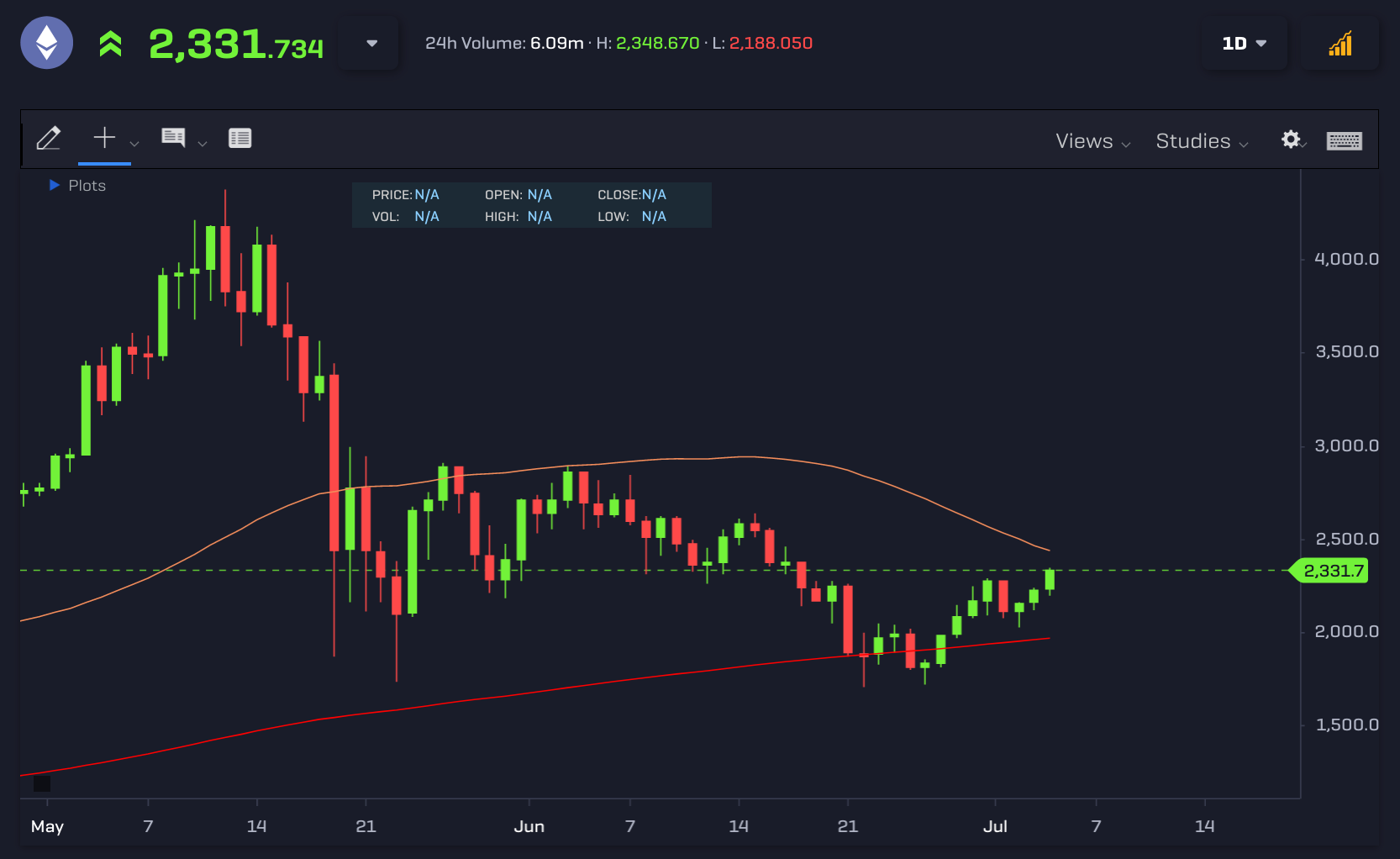 Since late May, the 50-day moving average (orange) has offered resistance. We'd want to see a daily close above this level, currently at $2,438, for the price of Ethereum to head towards other resistance levels at $2,600 and $2,900.