In our previous article, we introduced the concept of technical analysis with candlestick charts. While short-term traders rely on the price action of cryptocurrencies to find entry and exit points, another important factor to be considered is market sentiment.

Understanding the psychology of the market you’re trading is important. Everyone has their own perspective, view and thoughts on why the market acts a certain way and how the market will develop in the future. The market is just a reflection of that, a collective of the thoughts and feelings of all individual traders.

News and social media play a big role in determining the market sentiment, which is the dominating emotion or idea that most traders feel best explains the current direction of an asset’s price action. Certain news stories (for example, a regulatory crackdown on bitcoin) may not greatly affect the fundamentals of a cryptocurrency like bitcoin, but it may have a large impact on the short-term price action and volatility.

If you’re long bitcoin based on sound technical analysis but then something sours the sentiment (which can happen quickly), then you need to re-evaluate your plan based on a change in sentiment.

By ignoring a shift in sentiment, you could open yourself up to an unnecessary loss. But if you’re aware of the key drivers of sentiment in the cryptocurrency markets, you’re able to minimise any losses and can adapt to sudden changes in the collective’s thoughts and feelings. That’s why if you want to trade over small timeframes, you need to be on the ball with sentiment analysis.

What is Sentiment Analysis?

As more and more traders become bearish, this sentiment dominates the market and manifests itself in the price action. However, it’s important to remember no single emotion can dominate or last forever. Think of your own emotions on a daily basis. You cannot stay happy or angry all the time. Instead, you generally feel a positive or negative emotion for a while, and you’ll always eventually return to ‘equilibrium’.

So in the example of a regulatory crackdown on bitcoin, eventually there will come a point where the bearish sentiment is overextended, and no longer justified, providing an opportunity for buyers to capitalise off the extreme negative sentiment. Identifying when the intensity of the bearish feeling amongst market participants is at a peak would be the aim of sentiment analysis in this case.

In such a scenario, traders using sentiment as a tool may go against the herd to buy bitcoin while bearish sentiment is at an extreme, that is before the price recovers from a severe drop, before most participants realise there was an overreaction and before the collective emotion of the market returns to equilibrium.

Everyone holds their own opinions or world views that influence how they think about a particular market. Because the market is a collection of a variety of individuals with different opinions or thoughts, these views combined are what we call market sentiment. It’s worth spending some time to figure out the sentiment of other traders (especially that of larger players who are more influential and have the potential to move the price significantly).

The Wall Street Cheat Sheet shows how different stages in a market cycle are dominated by different emotions. By examining the sentiment of other traders, you can try to assess what stage of the market cycle we are in now.

It may also be useful to look at the chart to analyse your own internal dialogue. Do you feel like selling all your possessions and going all in on bitcoin? Perhaps it’s best to counteract this feeling, as it could be a sign that the market is in the Belief or Thrill stage of the cycle shown below:

While the cheat sheet only gives a rough guide, an important thing that it also shows: how the emotions at the top of market cycle last a far shorter duration than for when the price of an asset is bottoming.

One way to trade using sentiment analysis is to find extreme highs or lows. For instance, you may have heard of the concept of a ‘crowded trade’. If everyone is buying a particular asset, the market would eventually reach a saturation point where there's no one is left to buy, since the entire crowd has done so already.

Similarly, if every analyst, commentator and everyone in your Twitter or social media feed thinks the price of bitcoin is going to rise to $100,000 in 2021, it's likely there’s a greater opportunity to sell bitcoin instead of buy, as this is one piece of evidence pointing to an extreme high in bullish sentiment.

So sentiment analysis can be used to your advantage when trading by going against the crowd when the market's psychology is in an extreme state. We can also use sentiment analysis to go with the crowd, buying a coin that is experiencing growth in positive sentiment. Another method is to find out the sentiment of bigger players, who trade or invest at a high, professional level or who have made correct predictions in the past about the behaviour of an asset.

What are the Best Tools for Gauging Cryptocurrency Market Sentiment?

There’s no easy way to measure how all the market participants are feeling individually. But there are some tools that attempt to uncover the sentiment of the cryptocurrency market, and may help to improve your trading performance and techniques.

The Crypto Fear and Greed Index is a cryptocurrency take on CNNMoney's fear and greed index, which measures the two primary emotions that drive the willingness of investors to buy or sell stocks. The idea is that excessive fear in the market depresses stock prices while too much greed inflates valuations.

Alternative.me applied this concept to the cryptocurrency market to create a metric that can be used to analyse if the market is fairly priced or not.

When the market is performing well, people display a fear of missing out (also known as 'FOMO') which stretches market valuations. In contrast, during slumps in the cryptocurrency market, many people are tempted to sell, so coins tend to be undervalued.

To stay on top of sentiment, monitor the Crypto Fear and Greed Index to get an idea of the current state of the market. You can also search for trading setups when there are extreme readings, such as when the cryptocurrency market is experiencing Extreme Greed (find an opportunity to sell) or Extreme Fear (find a good opportunity to buy).

Let's look at an example: buying bitcoin on the daily close when the Crypto Fear and Greed Index hit a low of 8 on March 14, 2020 produced an enormous return of +684% to date.

At the other end of the spectrum, on April 14 and April 18 2021, the Index reached a high reading of 79, indicating extreme greed, while bitcoin posted an all-time high above $64,000 inbetween these two readings. 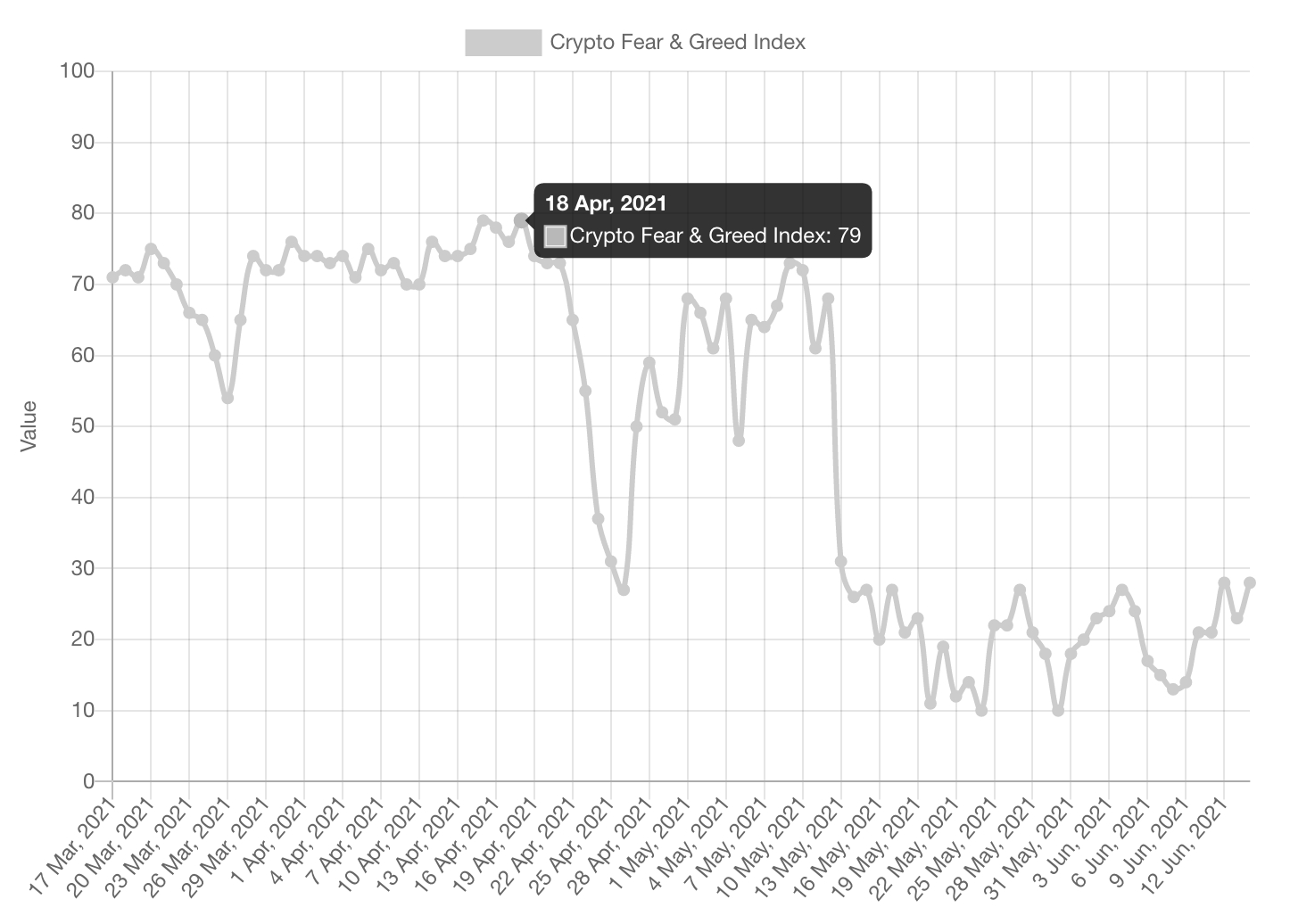 The price of bitcoin then fell to lows of around $47,000 in the following two weeks. The Crypto Fear and Greed Index then posted a low of 27 (indicating extreme fear) just one day after the bottom for that move was established around $47,000 on April 25, 2021, which provided an opportunity to buy and the price returned to the $59,000 level by early May.

Check out the Crypto Fear and Greed index for yourself here.

The cryptocurrency analytics platform Sanbase has several features that can help you with sentiment analysis of different cryptocurrencies:

As the chart below shows, many of the peaks and troughs in the 7-day moving average of the positive sentiment for Ethereum have previously aligned with turning points in the price action of ETH since early 2021:

LunarCrush is a platform dedicated to 'social listening', providing a wealth of data on the social activity related to different cryptocurrencies. The features useful for sentiment analysis are listed below:

For example, we've created an alert to trigger if the social volume for bitcoin increases +5% on the previous day. The Alert Preview shows us that over the past year, the return on this strategy would've been roughly +53% with an alert provided every 3 days on average. You can experiment with the parameters and find a strategy based on sentiment. Of course, it's worth keeping in mind that historical performance is not a guide to the future.

Get an account and add alerts on LunarCrush to see detailed information related to the sentiment of different cryptocurrencies.If you enjoyed our article on sentiment analysis or found it useful, please share it on social media. Are there any particular metrics or topics related to cryptocurrency trading you'd like to read about? Let us know via Discord or via Twitter!